The recoil force of this cartridge is described by some as being "beyond the limits of the human body". 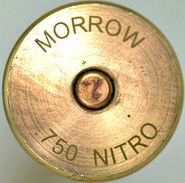 Headstamp
Add a photo to this gallery

Retrieved from "https://guns.fandom.com/wiki/.750_Nitro_Express?oldid=73142"
Community content is available under CC-BY-SA unless otherwise noted.