The XM645 is a redesign of the older XM110 round. The casing is now 4mm longer in length, while eliminating the concave bottom area of the casing structure. Early examples also implement a new single-piece piston primer, while later rounds used traditional Berdan primer caps.

The casing is also used as the basis for the 5.77×52mm SBR cartridge developed for the AAI SBR weapon.[1] 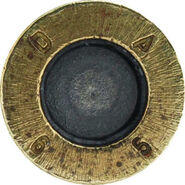 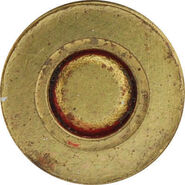 Headstamp
Add a photo to this gallery

Retrieved from "https://guns.fandom.com/wiki/5.56×57mm_XM645?oldid=87140"
Community content is available under CC-BY-SA unless otherwise noted.