Small rifle
The 5.6×44mm XM144 was an experimental military small arms cartridge developed by Frankford Arsenal as part of the SPIW project.

It was developed as a competitor to the AAI-designed XM110 round, but also fires a single, saboted flechette, the same type as used in the XM110. However, the XM144 uses a traditional-style casing of a different size and length.

There were different variations of this round, some of which that were developed by Winchester, as indicated by a "W" in their designations.

One of them is the original XM144 with the saboted flechette projectile, which is fired at a muzzle velocity of 1,220 meters per second (in excess of 4,000 feet per second). Olin had also developed the XM144WE1, as an attempt to improve on the original cartridge, featuring a .120 inch diameter primer.[1]

Another is the XM144WE4, a Winchester-developed variant which is designed to use traditional blunt projectiles. But, what makes the WE4 version different is that the casing was made slightly thicker to accommodate additional propellant. Because of the differences in the casing thickness, neither version is universal. The WE4 casing had also carried over to the XM216 cartridge.

Yet another is the flechette-based XM144E3, which was used in the prototype Universal Machine Gun developed by Springfield Armory. 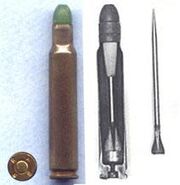 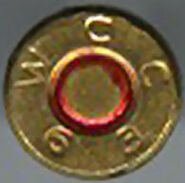 XM144 with blunt projectile
Add a photo to this gallery

Retrieved from "https://guns.fandom.com/wiki/5.6×44mm_XM144?oldid=87141"
Community content is available under CC-BY-SA unless otherwise noted.