.22 Arrow
The 5.6×53mm XM110 (originally designated .22 Arrow) was an experimental military small arms cartridge developed by AAI Corporation. It was originally developed for Project SALVO, and it was also implemented in the Special Purpose Individual Weapon program.

The XM110 is a cartridge with a single 0.71mm (.027") diameter flechette encased in a longintudinally reinforced, glass polyester sabot. It features a unique piston primer. In assembly, the piston primer was inserted down through the neck of the case and held securely against forward movement by means of a crimp, which showed as four distinctive dimples in the outside circumference of the case.

It was intentionally positioned slightly forward inside the primer pocket, and was designed to be fired by a blow from the weapon’s flat-faced firing pin. This would collapse the whole piston forward, whereupon the internal, frontal point of the piston itself detonated the priming compound, thus igniting the powder charge. The resulting pressure inside the case not only pushed the saboted flechette down the bore, but at a certain point forced the collapsed piston backward a short distance, cushioned by the flat-faced firing pin.

When the piston protruded about two millimeters (0.80”) beyond the base of the case, primer movement was halted by the flared front section of the primer body contacting the inner base of the cartridge case. The heavy-bodied firing pin continued to the rear, transmitting the energy needed through a camming action to rotate and unlock the bolt and thus begin the action cycle of the weapon.

The flechette itself is 1.6 inches (40.5mm) in length, 0.07 inches (1.8mm) in diameter, and had a tail width of 5mm with four tail fins. The projectile weighs about 10 grains (approximately 0.65 grams). The flechette has a bimetallic composition, with one half being made of a heavier metal, and the tail area being made of a lighter metal. Because of differing materials, structure, and shape dimensions, the flechettes weigh between 10 and 18.5 grains, but the length of the projectile is still 1.6 inches. The rivaling 5.6×44mm XM144 cartridge developed by Frankford Arsenal also uses this projectile.

The XM110 round was originally developed for Project SALVO, wherein a modified Winchester Model 70 rifle was used to test it. The result was a weapon with somewhat less accuracy than the 7.62×51mm NATO rounds, but with equal penetration and a trajectory so flat it could be fired with no sight adjustment out to 400 yards (370 m). Better yet, the rounds were very light, and had almost no recoil in comparison to even the other 0.22-inch caliber weapons under development. This meant they could be fired at extremely high cyclic rates from a very lightweight weapon.

The XM110 transitioned to the Special Purpose Individual Weapon program, where AAI used it as the point target ammunition for its first-generation SPIW prototype. 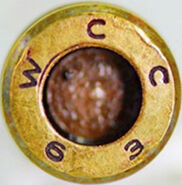 Internal diagram
Add a photo to this gallery

Retrieved from "https://guns.fandom.com/wiki/5.6×53mm_XM110?oldid=87161"
Community content is available under CC-BY-SA unless otherwise noted.