Large rifle
The 7.62×51mm NATO (officially known as 7.62 NATO), is one of the standard military small arms round for the NATO countries (North Atlantic Treaty Organization). It is very similar in

After World War I, the U.S. Army was looking for a new military round for light semi- and fully-automatic weapons. The project was the T65 rifle. In 1932, the .276 Pedersen was rejected in favor of the already-established .30 caliber cartridges.

During the same time period of NATO adoption, the British and Canadians chambered the FN FAL in 7.62 and the West Germans chambered the H&K G3 as well as modifying their CETME Spanish rifle in 7.62. The Americans followed suit in 1957, and adopted the 7.62 NATO M14.

The 7.62×51mm NATO is very similar to the .308 Winchester cartridge; they are nearly completely interchangeable and share the same dimensions (7.62x51mm).

It is best fired from a barrel with a 1:12 rifling twist, and fires with a muzzle velocity between 2600 and 2800 feet per second, dependent on powder load, bullet weight, and barrel length. Bullet weights range from around 150 grains to 190 grains. However, the 7.62 NATO can use any projectile the .308 Winchester uses; pressure will be slightly lower. 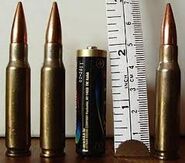