The 7.92×33mm Kurz is the world's first intermediate ammunition ever created. It was created in Nazi Germany around the same time as the StG-44, which is chambered for this round.

After World War II, the cartridge was tested and used in prototype rifles in Argentina and Belgium, amongst other nations, during the late 1940s and early 1950s. The first FN FAL prototype, the Universal Carbine was designed to fire the cartridge when NATO was organized. After the war, it was manufactured by East Germany (the GDR), Czechoslovakia (ČSSR), and Egypt.

Spain continued development after the war, creating a few variants of the cartridge, such as tracer rounds, boat-tailed rounds and slightly shorter, lead-cored bullets. These developments were encouraged by Calzada Bayo, a Spanish lieutenant colonel. However, they were canceled and Spanish CETME rifles were chambered for a variant of the 7.62×51mm NATO round.

Demand for the ammunition still exists, as the StG-44 is still in use by some within the Lebanese Forces militia, as well as irregular forces in some countries in the Horn of Africa and the Middle East, where captured German arms were distributed as military aid by Eastern Bloc countries as well as Yugoslavia. It is currently manufactured by the Prvi Partizan factory in Užice, Serbia. Reloadable cartridge cases can be produced by resizing and trimming 7.62×51mm NATO casings, and Hornady produces a 125-grain, .323 inch (8.2 mm) bullet for this caliber.

In Pakistan, the same cartridge is also reported to be in use by the local name of "44 Bore". This either refers to the "44" of the MP 44/StG-44 series or the "L44A1" inscription found on the headstamps on necked-down 7.62×51mm cartridge cases. It is used in locally-made AK-pattern weapons in semi-automatic only (produced or converted in Peshawer, Kohat and Derra Adam Khel, etc.) that chamber this cartridge, since 7.62×39mm is a restricted caliber (known as Prohibited Bore or "PB" in Pakistan). These AK-pattern weapons are usually considered inferior due to inconsistent gunsmithing of weapons chambered or converted for this cartridge and lack of quality control of the ammunition. It is sometimes used by private security companies. The usage of 7.92mm bullets in 7.62mm barrels without re-boring is not considered to be a safe practice. 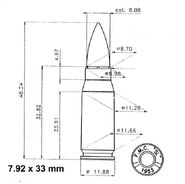 Schematic
Add a photo to this gallery

Retrieved from "https://guns.fandom.com/wiki/7.92×33mm_Kurz?oldid=85389"
Community content is available under CC-BY-SA unless otherwise noted.