10- to 12-round detachable box magazine (disputed)

450 rounds per minute
The Close Assault Weapon System (CAWS for short) is a prototype automatic shotgun developed by AAI Corporation.

The AAI CAWS, developed at the Crane Naval Weapons Support Center, was submitted to the Close Assault Weapon System program and competed with the H&K CAWS. It was never adopted by the military as the project fell through.

The CAWS was a recoil-operated shotgun based on the earlier TRICAP 20mm assault weapon, also developed by AAI. It reused the M16 assault rifle's pistol grip and buttstock, the latter of which being removable so that the weapon could be made more compact for close quarters combat situations. Its profile was designed similarly to the M16 to allow for easier familiarization for troops in the field.

Recoil was said to be about the same as the M16, and that it was easy to control even with its high rate of fire, thanks to its muzzle brake.

The weapon can use either a reflex optical scope or traditional iron sights.

The CAWS is chambered for a proprietary, belted 12 gauge shotshell, which came in specialized loads, such as high-explosive shells, armor-piercing shells, tear gas bombs, buckshot, and other types of munitions.

Also of note are 8-projectile flechette loads, which are an evolution of the 32-projectile flechette shotshells developed by AAI during Project SALVO. Each flechette in the shell weighs 31 grains (equivalent to 2 grams), and upon firing, they scatter at a distance of 150 meters across a 4 meter circle. Within this range, the flechettes maintain a velocity of approximately 365 meters per second (1,200 feet per second) and could penetrate through 76mm thick pine boards or 3mm thick low-carbon steel plates. A fluted sabot helped dispirse the flechettes keeping them from interfering with each other during flight. Single-flechette loads were also tested with the CAWS.

With a special adapter, it could fire standard 12 gauge shotshells.

The weapon also used a 18.5×54mm SCMITR load, which carries ten blade-shaped projectiles that are stamped from sheet metal[1]. The 1 gram (15.4 grains) projectiles have the same sectional density as the flechettes, but their flat shape could cause a larger, more disabling wound. Each projectile has two fins, which are not enough to stabilize them. So, the fins were slightly twisted to allow the projectile to spin for stability. Their dispersion is low, with all ten blades capable of hitting within a 4 meter (13 feet) circle at a range of 150 meters (492 feet) with a muzzle velocity of 365 m/s (1,197.51 ft/s), enough to penetrate through 76mm pine boards or 3mm low-carbon steel plates, similar to the 8-projectile flechette loads. 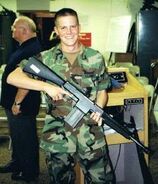 Close-up of the sabot and SCMITR projectiles. 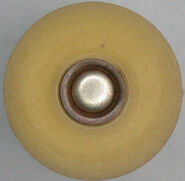 Another sectioned experimental 20-gauge SCMITR round, possibly tested by AAI before the CAWS program. 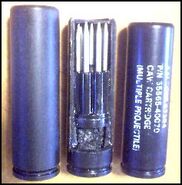 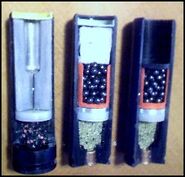 Cutaway of 12-Gague single flechette round next to buckshot rounds.