The AAI OICW is an entrant in the Objective Individual Combat Weapon Program. The development of the AAI OICW is led by AAI Corporation, and involved Dyna East, Olin, Hughes, Omega, and FN.

The weapon's development progressed to mock-up stage before being terminated, as the ATK/H&K design was selected over AAI OICW, and received the contract for prototype manufacture.

Held by a soldier in a promotional image 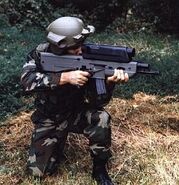 Being aimed by a soldier

Individual components
Add a photo to this gallery

Retrieved from "https://guns.fandom.com/wiki/AAI_OICW?oldid=86401"
Community content is available under CC-BY-SA unless otherwise noted.