350 rpm
The Aerojet XM174 (officially the Launcher, Grenade, 40mm, Low-Velocity, Automatic, XM174)[1][2] was a prototype American lightweight automatic grenade launcher designed and manufactured by the Aerojet Ordnance Manufacturing Company with assistance from the Rock Island Arsenal and Springfield Armory in very limited numbers during the mid-1960s.

Designed as per a request by the United States Army for a rapid-firing grenade launcher which could be used to fight back and win against the communists, the XM174 was initially one of four different proposals submitted to the Army for evaluation; of the four designs, the XM174 was selected for further trialing, with the Army even rejecting a handheld rifle-like grenade launcher with a box magazine, stock and bipod.[3]

It was initially expected that the XM174 was going to be mounted on vehicles (the original prototype was belt-fed); however, lightweight designs eventually swayed the evaluators' opinions, with Aerojet working with the Army to continuously refine the design. The final incarnation of the weapon featured a pistol grip with a 12-round detachable drum magazine, also designed by Aerojet; this allowed its user to do "run and gun" tactics and fire the weapon from the shoulder.[1]

The weapon was subsequently combat tested during the Vietnam War, with some 10 examples manufactured for this purpose; it was around this time where the US Army began to have some reservations about the design. The magazine, when loaded, was nearly as heavy as the gun itself, and because it was so heavy, affected the balance of the gun and made the weapon frustrating to handle. A bigger issue was the magazine's durability; the magazine was very prone to breakage, with pieces breaking off and small dents being able to be enough to jam the gun entirely. What made this issue worse was that in order to fix these magazines, they would have to be taken apart entirely. Within three and a half months of combat testing, troops who were issued these guns for field testing discarded 75 broken magazines.[3]

By far the biggest issue of the weapon was its safety; troops quickly discovered that the safety could ease itself into the "fire" position without the assistance of its user. The weapon was also tested on helicopters; its range was a major point of complaint when used as a mounted weapon, with machine guns having far greater range. To alleviate these issues, Aerojet continued to refine and modify the design, eventually culminating in the XM174E3, which fired rocket-propelled grenades.[3]

Around this time, a new grenade launcher was being developed, known as the Mk 19; the weapon proved effective during tests and was swiftly adopted and the XM174 abandoned, although some continued to be used until the early 1970s in Vietnam.[1] Aerojet continued to market the XM174 as late as 1976, touting it as "a nimble weapon for the individual soldier" but found no market.[3]

The XM174 is a lightweight automatic grenade launcher which has the capability to fire from the hip. The weapon is heavily based on the M1919A4 Browning machine gun and uses recoil operation to feed its rounds. The weapon takes a 12-round detachable drum magazine attached to the right of the weapon; inside the drum magazine is a drive spring which helps to advance the rounds into the gun. The weapon ejects out the right of the gun. Early versions were belt-fed.[4]

The weapon had three refinements, the XM174E1, E2 and E3. These are likely detail improvements.[4] 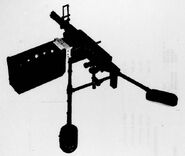 Promotional photo
Add a photo to this gallery

Retrieved from "https://guns.fandom.com/wiki/Aerojet_XM174?oldid=89763"
Community content is available under CC-BY-SA unless otherwise noted.