The AR-10 was an American battle rifle that was designed by ArmaLite and produced by Artillerie-Inrichtingen. It was the precursor to the popular AR-15 rifle.

The AR-10 was originally conceived by Eugene Stoner in 1953, before his subsequent employment by ArmaLite. Stoner had originally designed the gun to feed from .30-06 BAR magazines with a side-mounted gas piston. When Stoner was recruited by ArmaLite in 1954, the company saw the potential for military sales and developed the design further. By late 1955 a second prototype had been produced, chambered for 7.62×51mm NATO, the standard rifle cartridge for most NATO member states. It was fitted with a German World War II-era Zf4 scope. In keeping with ArmaLite's design philosophy, efforts were taken to reduce the weight of the design by incorporating sheet metals and fiberglass furniture.

ArmaLite was largely satisfied with improvements made to the design by 1956 and began to market the weapon. However, the manufacturing facilities were not yet in place to actually produce the weapon. A prototype model was submitted to US Army tests at Springfield Arsenal and was not well received, resulting in a dispute between ArmaLite's investors and the commission that tested the gun, CONARC. Nevertheless, Stoner took note of the Army's criticism and made modifications to the design, including the incorporation of a stronger steel barrel.

Later that year, Richard Boutelle, the president of the Fairchild Corporation and financial controller of ArmaLite, exhibited an AR-10 prototype to a group of Dutch businessmen from the Fokker aircraft company. Boutelle wanted to license the gun to Fokker in exchange for the production rights for one of their planes. Fokker did not take on the production rights, but instead passed them on to another Dutch company, the state-funded Artillerie-Inrichtingen, with whom Boutelle made an agreement with in 1957. Stoner was sent to the Netherlands to oversee production of the gun there, and made further changes to the design to facilitate to the standards of the Dutch Army, who were ultimately the intended customer. However, setting up the manufacturing facilities for the gun took longer than anticipated, and further problems came in the form of disputes between the Dutch government and Artillerie-Inrichtingen; the government did not like the AR-10 and did not want to fund its production. When the Dutch Army tested the gun, it was unsurprisingly rejected, eliminating a domestic market for the AR-10.

While production of the gun was being set up in the Netherlands, Boutelle attempted to set up three separate marketing divisions to handle the sales of the gun, each to a different part of the world: the companies selected were Interarmco, who would sell to Latin America; Cooper-MacDonald, who would sell to the US and Pacific Islands; and Sidem Internaitonal, who would sell to Europe. The African continent was open to sales from all three companies. Boutelle's reasoning was to generate friendly competition between the three divisions and therefore increase sales. These companies were successful in creating interest in the AR-10, and trials were arranged in various countries, including Austria and Finland. However, business was hampered by the lack of production progress on Artillerie-Inrichtingen's end - with the ongoing issues, none of the marketing divisions could guarantee that they could secure an order of AR-10s within the next two years, putting off any potential customers.

By 1959, the production of the gun was beginning to pick up some speed and small success was achieved, with Interarmco managing to secure sales to Sudan, Nicaragua, and Portugal, and Cooper-MacDonald achieved an order with Burma. But Boutelle, frustrated with the slow sales and production, cancelled the contract with Artillerie-Inrichtingen in late 1959, resulting in the Portuguese order being cut off, as only 1,200 rifles had been sent to them by the time production ended. Stoner had also just developed an improved model known as the AR-10A.

Boutelle transferred the production licenses of both the AR-10 and the AR-15 to Colt, who were to take up the manufacture of the AR-10A with their own modifications to the design. But beyond a single prototype, Colt never produced the gun, as they found the AR-15 to be more lucrative and demanding of their attention. With the introduction of the intermediate 5.56×45mm NATO cartridge, most NATO member states were unlikely to buy more 7.62×51mm rifles, which cast the future of the AR-10 in doubt. When Cooper-MacDonald decided to stop marketing the AR-10 in favor of the AR-15, and quickly achieved sales with it, Boutelle finally made the decision to retire the AR-10 for good.

The AR-10 was a gas-operated battle rifle chambered in 7.62×51mm. It utilized a direct gas impingement system rather than a conventional gas piston.

Light machine gun being mounted on a tripod.

Marketing material displaying all variants.
Add a photo to this gallery

With bipod and modified cocking handle. 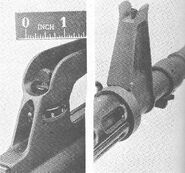 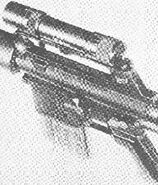 Schematics.
Add a photo to this gallery

AR-10A prototype.
Add a photo to this gallery
Retrieved from "https://guns.fandom.com/wiki/ArmaLite_AR-10?oldid=91898"
Community content is available under CC-BY-SA unless otherwise noted.