650 rpm
The AR-16 was an American battle rifle produced by ArmaLite.

The AR-16 was developed shortly after ArmaLite's previous rifle, the AR-15. It was designed by Eugene Stoner in 1959 and unlike the AR-15, it was not intended for domestic use by the US Army; it was instead marketed towards emerging nations with a limited industrial base. The 7.62×51mm cartridge was selected for the AR-16, rather than the 5.56×45mm cartridge which had recently been standardized by NATO, because it was perceived that the AR-16's intended customers would be still reliant on 7.62mm and unwilling to buy 5.56mm rifles. In a marketing ploy, ArmaLite also emphasized that the machine tools used to produce the gun could be re-purposed for agricultural and office purposes.

The AR-16 was briefly marketed in the early 1960s but never entered full production due to a lack of sales. There was very little interest in the design, as most NATO member states were in the process of adopting the 5.56×45mm cartridge, and countries that were still using 7.62×51mm were largely satisfied with the FN FAL. In order to adapt to the changing market, ArmaLite redesigned the weapon in 5.56mm; this evolved into the ArmaLite AR-18.

Plans were made for several variants of the standard AR-16, including a 9×19mm submachine gun and a civilian sporting rifle. Ultimately, only a carbine variant was ever made.

The AR-16 was a short stroke piston operated, selective-fire rifle that utilized a rotating bolt. In order to facilitate for ease of production, the design of the rifle was kept relatively simple and it was made from inexpensive sheet metal pressings. The only machined components were the barrel, bolt carrier, and a pair of brackets. The bolt, extractor, and flash hider could be machined but this was inessential. The carbine model of the AR-16 featured a folding stock. 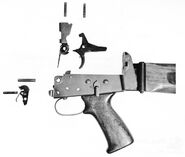