The ArmaLite AR-18 is an assault rifle chambered for 5.56x45mm NATO ammunition. The AR-18 was designed by Arthur Miller, George Sullivan, and Charles Dorchester at ArmaLite in 1963 as an improved 5.56 mm caliber alternative to ArmaLite's previous AR-15 design, for which production rights had been sold to Colt Manufacturing Company. ArmaLite's interest in the design waned when the Colt AR-15 was selected for production by the US Army as the M16.

The AR-18 was a gas-operated, selective-fire rifle using a rotating bolt. The upper/lower receiver is made from pressed steel as the bolt/bolt carrier, runners were machined to ease production.

Unlike the AR-15 that it is often compared to, the AR-18 has a short stroke piston mechanism, which has been credited with greatly increasing the reliability of the weapon. However, despite it being a mechanical improvement on the AR-15 platform, the timing of its creation set it to be finalized one year before the M16 was adopted into the US military, and so it was passed over. As a result it was sold to other countries, typically ones with less abundant money resources, where it had more success, but never on the same level of the AR-15. Its most notable user became the Provisional Irish Republican Army during the Troubles in Northern Ireland becoming iconic and synonymous within the scope of the conflict. 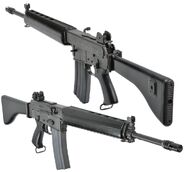 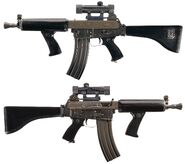