The Barrett M82, informally known as the Light Fifty or the Barrett .50 cal, is a high-powered special applications scoped rifle developed by the American Barrett Firearms Company. It is chambered in the .50 BMG cartridge. This was the first gun to put the .50 BMG cartridge in a shoulder-fired rifle that could be operated by a single individual.

The Barrett Firearms Company was founded by Ronnie Barrett for the single purpose of building semi-automatic rifles chambered for the powerful 12.7×99mm NATO (.50 BMG) ammunition, originally developed for and used in M2 Browning machine guns. Barrett began his work in the early 1980s and the first working rifles were available in 1982, hence the designation M82. Barrett continued to develop his rifle through the 1980s, and developed the improved M82A1 rifle by 1986.

The first conventional military use was the purchase of about 100 M82A1 rifles by the Swedish Army in 1989. Major success followed in 1990, when the US Military purchased significant numbers of the M82A1 during operations Desert Shield and Desert Storm in Kuwait and Iraq. About 125 rifles were initially bought by the US Marine Corps, and orders from US Army and Air Force soon followed. The M82A1 is known by the US Military as the SASR — "Special Applications Scoped Rifle", and it was and still is used as an anti-matériel weapon and EOD (explosive ordnance disposal) tool. The long effective range, over 1500 m with a record shot of 2500 m, along with high energy and availability of highly effective ammunition such as API and Raufoss Mk 211, allows for effective operations against targets like radar cabins, trucks, parked aircraft and so on. The M82 can also be used to defeat human targets from standoff range or when targets are behind cover. However anti-personnel work is not a major application for the M82 (or any other .50 BMG rifle, for that matter).

Further development led to the M82A2 bullpup rifle in 1987, which was a reduced-recoil design to be fired from the shoulder. It failed to make an impression on the world firearms market, and was soon dropped from production. However, in 2006, Barrett had developed the XM500, with a bullpup configuration similar to the M82A2.

The latest derivative of the M82 family is the M82A1M rifle, adopted by USMC as the M82A3 SASR and bought in large numbers. This rifle differs from M82A1 in that it has a full length Picatinny rail that allows a wide variety of scopes and sighting devices to be mounted on the rifle. Other changes are the addition of a rear monopod, slightly lightened mechanism and detachable bipod and muzzle brake.

Another variant of the original weapon is the M82A1A Special Application Scoped Rifle, an almost identical model but specifically designed to fire the Raufoss Mk 211 Mod 0 round, a type of API (Armour Piercing Incendiary) ammunition.

The United States Coast Guard uses the Barrett M82 rifle for drug interdictions. Effective interdiction requires that personnel on Coast Guard cutters be able to deliver accurate fire to stop high-speed drug runners. Similarly, Barrett M82 rifles have attracted attention from law enforcement agencies; they have been adopted by the New York Police Department. If it becomes necessary to immobilize a vehicle, a .50 BMG round in the engine block will shut it down quickly. If it is necessary to breach barriers, a .50 BMG round will penetrate most commercial brick walls and concrete blocks.

According to the documentary The Brooklyn Connection, M82s smuggled into Kosovo by sympathizers in the United States have quickly become popular long range sniper rifles in the Kosovo Liberation Army. In Northern Ireland during the 1990s, the South Armagh Brigade of the Provisional Irish Republican Army (IRA) maintained an extremely effective and intensive sniping campaign against the British Army and Royal Ulster Constabulary police. The Barrett rifle was used, and in 1997 it killed the last British soldier to die in the conflict, Stephen Restorick, in Northern Ireland. Later a top IRA sniper, Michael Caraher, was arrested and his Barrett rifle was captured by British forces.

As a side note, the Barrett M82A1 rifle was used in 2002 as a platform for the experimental OSW (Objective Sniper Weapon) prototype. This weapon was fitted with a shorter barrel of 25mm caliber, and fired high explosive shells developed for the 25×59mm OCSW automatic grenade launcher. The experimental OSW showed an increased effectiveness against various targets, but the recoil was beyond human limitations. This weapon, also known as the Barrett 'Payload Rifle', has now been designated as the XM109.

The XM107 was originally intended to be a bolt-action sniper rifle, and in fact it was selected by the U.S. Army in a competition between such weapons. However, the decision was made that the US Army did not, in fact, require such a weapon. The rifle originally selected under the trials to be the XM107 was the Barrett M95.

When the Army decided it no longer needed these weapons, it found that it had money already allotted for "XM107 rifles," and rather than deal with this complication, the decision was made to change the M82's designation to M107, and use the money to purchase those type of rifles instead. In summer 2005, the M82 finally emerged from its Army trial phase and was approved for "full materiel release", meaning it was officially adopted as the Long Range Sniper Rifle, Caliber .50, M107.

The Barrett M107 is a .50 caliber, shoulder-fired, semi-automatic, sniper rifle. Like its predecessors the rifle is said to have manageable recoil for a weapon of its size owing to the barrel assembly that itself absorbs force, moving inward toward the receiver against large springs with every shot. Additionally, the weapon's weight and large muzzle brake also assist in recoil reduction. Various changes were made to the original M82A1 to create the M107, with new features such as a lengthened accessory rail, rear grip and monopod socket. Barrett has recently been tasked with developing a lightweight version of the M107 under the "Anti-Materiel Sniper Rifle Congressional Program," and has already come up with a scheme to build important component parts such as the receiver frame and muzzle brake out of lighter weight materials.

The Barrett M107, like previous members of the M82 line, are also referred to as the Barrett "Light Fifty". The designation has in many instances supplanted earlier ones, with the M107 being voted one of 2005's Top 10 Military Inventions by the U.S. Army. Barrett Firearms Manufacturing currently markets the M107 as the M82A1.

A commercial development of the "new" M107, the M107CQ is specifically designed where the firepower of a .50 caliber rifle is required, but the bulk of the M82/M107 series prevents the weapon from being used. The M107CQ is 9" shorter in overall length (all in the barrel) and 5 pounds lighter than the M107. According to the manufacturer the M107CQ is suitable for "use in helicopters, force protection watercraft, tactical scout land vehicles and as an urban soldiers combat multiplier for the close quarter battles of today."

The M82 is a short recoil-operated, semi-automatic, anti-matériel rifle.

When the weapon is fired, the barrel initially recoils for a short distance (about an inch/25mm) being securely locked by the rotating bolt. After the short travel, a cam pin on the bolt engaged in the curved cam track in the receiver turns the bolt to unlock it from the barrel extension. As soon as the bolt unlocks, the accelerator arm strikes it back, transferring part of the recoil energy of the barrel to the bolt to achieve reliable cycling. The barrel is stopped and the bolt continues back to extract and eject the spent case. On its return stroke, the bolt strips the fresh cartridge from the box magazine and feeds it into the chamber and finally locks itself into the barrel extension. The striker also is cocked on the return stroke of the bolt. The gun is fed from a large detachable box magazine holding up to 10 rounds.

The receiver is made from two parts (upper and lower), stamped from sheet steel and connected by cross-pins. The heavy barrel is fluted to improve heat dissipation and save weight, and fitted with a large and effective reactive muzzle brake. On the earlier models the muzzle brakes had a round cross-section, later M82 rifles are equipped with two-chamber brakes of rectangular cross-section.

M82A1 rifles are fitted with a scope mount and folding backup iron sights, should the glass scope break. The US Military M82 rifles are equipped with Leupold Mark 4 telescopic sights. The M82A1M (USMC M82A3) rifles have long Picatinny accessory rails mounted and US Optics telescopic sights. Every M82 rifle is equipped with a folding carrying handle and a folding bipod (both are detachable on the M82A3). The M82A3 is also fitted with a detachable rear monopod under the stock. The stock is fitted with a soft recoil pad to further decrease the felt recoil. M82A1 and M82A3 rifles could be mounted on the M3 or M122 infantry tripods (originally intended for machine guns) or on vehicles using the special Barrett soft-mount. The M82A1 can be fitted with a carry sling.

The M82A1 is a semi-automatic rifle, in conventional configuration. It comes with a 29-inch barrel (the "Close Quarters" variant has a 20-inch barrel) and feeds from a 10-round box magazine. It is chambered in .50 BMG.

The M82A2 differed from M82A1 mostly in its configuration; it is in a bullpup configuration, which means that the pistol grip along with trigger had been placed ahead of the magazine, and the stock has been placed below the receiver, just after the magazine. An additional forward grip was added below the receiver, and the scope mount has been moved forward as well. It comes with a 29-inch barrel.

This variant is no longer manufactured.

The M82A1M (also known as M82A3) is an upgraded variant of the M82A1 fitted with a lengthened accessory rail, rear grip and monopod socket. It can be distinguished from the M107 by its receiver mounted rear sight, visible folding front sight and slightly shorter accessory rai. The accessory rail of the M82A1M is usually, but not always, raised higher up than the M107.

The M107 is a variant of the M82 designed for the US Army. Noteworthy differences are the plastic rear grip bolted to the lower part of the buttstock and the rail that runs along the top spine all the way to the front of the forend. It can be distinguished from the M82A1M by its rail mounted rear sight, front sight which is concealed within the accessory rail, and slightly longer accessory rail. Barrett Firearms Manufacturing currently markets this variant as the M82A1.

The M107A1 is an improved version of the M107. Significant enhancements include a reduction in weight of 5 pounds, a new cylindrical titanium muzzle brake and titanium key/recoil buffer system which allows the weapon to operate with a Barrett-designed suppressor, and other functional modifications that increase durability and operator utility. 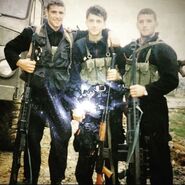 Difference between other variants: It has a smaller and lighter muzzle brake, allowing it to be lighter.

Retrieved from "https://guns.fandom.com/wiki/Barrett_M82?oldid=86862"
Community content is available under CC-BY-SA unless otherwise noted.