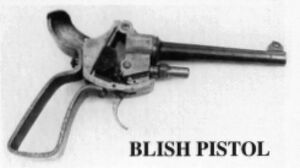 The Blish pistol was a one-off patent demonstration model built by Cpt. John Bell Blish, as part of his successful US Patent application for what he dubbed the "Blish Principle of Metal Adhesion." His claim was that two different metals would adhere to one another if placed under sufficiently high pressure, but would slide freely against each other when this high pressure dropped. In other words, at some point the coefficient of friction rises in a non-linear fashion. This is not actually in line with the known laws of physics, and what Blish actually ended up producing, largely by trial and error, was a series of delayed-blowback weapons, with the delay caused by mechanical disadvantage (ie, it was a friction-delayed blowback action).

The pistol was used to demonstrate his patent application and later to demonstrate to the engineers of Auto-Ordnance how his theories worked (or rather, that they did not). The pistol uses a .32 ACP caliber Luger P08 barrel attached to the frame. When the pistol is loaded, the bronze lock is closed on the chambered round.

By Blish's account, when fired the bronze lock is held in place by adhesion caused by the chamber pressure from the cartridge, until the bullet leaves the barrel. At this point the pressure drops and, with the residual gas pressure, the bronze wedge is forced back and down the rails and the spent cartridge flies out the back and is deflected to the right by the pistol frame. What actually happened when the weapon was fired was that the lock was not held in place by gas pressure at all, and it was in fact the mechanical disadvantage created by the off-axis angle of the rails that resisted its rearward motion. 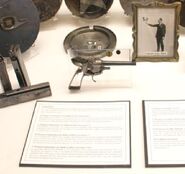 Add a photo to this gallery
Retrieved from "https://guns.fandom.com/wiki/Blish_pistol?oldid=73788"
Community content is available under CC-BY-SA unless otherwise noted.