The caplock mechanism, often referred to simply as caplock or in European countries Percussion lock, was the final firing mechanism to be used for a musket; the caplock succeeded the flintlock. It was invented by Scotsman Alexander John Forsyth and patented in 1807. Over the years, it was improved upon many times, to help make it more efficient in battle. However, the mass adoption of caplock weapons happened during the 1840s. It was the primary weapon ignition system used in rifles during the American Civil War, by both Union and Confederate soldiers.

The caplock was very simple. After the weapon was fired, the wielder loaded powder down the barrel, along with a projectile. He then loaded a percussion cap into the small opening, or nipple, on the side and pulled back the hammer. After this was done, the wielder pulled the trigger, releasing the hammer on the cap, making the cap explode. Then the flames from the cap would be guided down the tube hole it was on, into the barrel, igniting the powder, and shooting the projectile.

Percussion caps were not only used in muzzle loader type weapons they were used also widlely in early colt revolvers. The caplock mechanism was the last muzzle loader mechanism it was the quickest loading mechanism of its time. 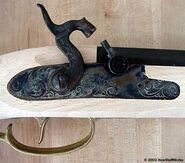 The side mechanics of a caplock rifle.

An animated diagram showing a caplock while being fired.

An English percussion pistol.
Add a photo to this gallery

Retrieved from "https://guns.fandom.com/wiki/Caplock?oldid=65627"
Community content is available under CC-BY-SA unless otherwise noted.