Start a Wiki
2020 version of the Colt Python

The Colt Python is a .357 Magnum caliber revolver manufactured by Colt's Manufacturing Company of Hartford, Connecticut. The Python is considered to be a classic model along with the Peacemaker, and the finest revolver ever made by Colt.

Pythons have a well-deserved reputation for their superior fit & finish, accuracy, smooth trigger pull and a tight cylinder lock-up. If there is a downside to all this precision, it is the Python's tendency to go "out of time" with continued heavy shooting. This is a condition in which the cylinder is no longer turning into exact alignment with the forcing cone, so a shooter may be sprayed with tiny bits of shaved projectile when the gun is fired. When this happens, the lockwork needs to be re-timed. Normally, the trigger rise picks up the slack when fired so that the lock-up is still secure. Eventually, though, all revolvers need a timing job; Pythons need them no more often than any others.

The Colt Python was first introduced in 1955 as Colt's top-of-the-line model, and was originally intended to be a large-frame .38 Special target revolver. As a result, it features precision adjustable sights, an exceptionally smooth trigger, solid construction, and plenty of extra metal. It was never intended to be the object of continuous heavy pounding of magnum ammo.

Pythons have a very "muscular" and businesslike appearance. A full barrel underlug, ventilated (actually, lightened) rib and adjustable sights combine to give the gun its unique look. Originally, Colt manufactured Pythons with hollow underlugs but quickly left them solid to add a very useful barrel weight. Finishes on these guns have always been outstanding. The Python was originally available in two finishes: Royal Blue and Bright Nickel. The Bright Nickel model was discontinued with the introduction of the more durable satin stainless and mirror-polished Ultimate Stainless models, but the stainless steel and Royal Blue finishes are still offered by Colt on the Python "Elite" model.

Pythons are available with 2.5 inch, 4 inch, 6 inch, and 8 inch barrels. 6 inch model is the most popular, and the 8 inch model is intended for hunting. The now-discontinued 3 inch barrel version is considered to be very collectible. The revolver today is made exclusively (when at all) by Colt's Custom Shop as the Python Elite model with a 4 or 6 inch barrel, and is still considered to be the Rolls Royce of handguns for its accuracy, jeweler-quality fit and finish, and aesthetic appeal. The basic lockwork design benefits greatly from slow, careful custom work - just what Colt didn't want to continue as it added so much to the final price. Retail prices start at $1000+. Resale for an original Python in just about any variation can see prices going beyond $3000. This is one factor that average shooters interested in revolvers, especially those with intense loyalty towards Smith & Wesson, have criticized, citing that Smith & Wesson revolvers do the exact same thing at less than a quarter of the price. However, Colt enthusiasts and revolver experts alike know that the exquisite features on the Python, on top of its rarity, more than justifies the high price it demands.

While the Python immediately made inroads into the law enforcement market when introduced, it has since fallen out of favor along with all other revolvers because of changing law enforcement needs that favor semi-automatic pistols today. Colt Pythons command high prices - new or used, and have found a place in the collection of many serious handgunners. Adding to these high prices was the end of large scale production of the Colt Python in 1996, the Colt Custom Gun Shop continued making a limited number of Pythons on special order until 2005.

The Python was relaunched in 2020 with a few improvements. These improvements include an improved steel alloy for robustness, more steel underneath the rear sight for strength, an interchangeable front sight, simplification of the inner mechanism, an updated walnut grip and probably the most important feature; an increased durability against hotter ammunition, specifically .357 magnum cartridges. As of now, it is only available in stainless steel, the finish of which being another improvement made over the old Python.[1] 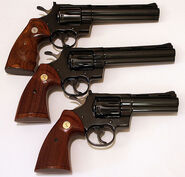 Colt Python (Stainless Steel)
Add a photo to this gallery 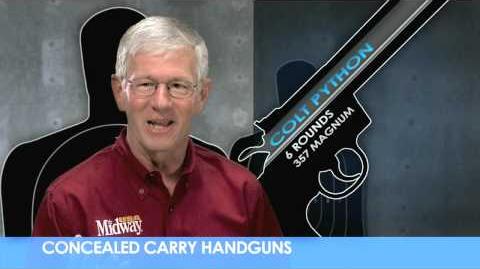 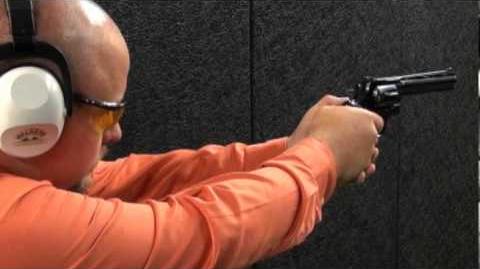 Retrieved from "https://guns.fandom.com/wiki/Colt_Python?oldid=86311"
Community content is available under CC-BY-SA unless otherwise noted.