Not to be confused with combination weapon.

A combination gun is a special type of firearm which typically comprises of a shotgun barrel and rifled barrel.

Having a long history in continents like Europe and Asia, combination guns were almost exclusively used for hunting purposes. Due to the ability for these firearms to fire either shotgun shells or rifle rounds, combination guns are extremely versatile in taking down many types of game, and are popular with hunters and gamekeepers due to their flexibility.

There are many types of combination guns.

A side-by-side design which has a shotgun barrel and rifle barrel placed side by side. Cape guns are usually custom made and mostly, if not always, originate from Europe. British cape guns are usually chambered for .303 British and a 12 gauge shell with the rifled barrel on the left, while German and Austrian cape guns are chambered for a wide variety of calibers with the rifle barrel on the right, however, they are mostly found chambered in 9.3×74mmR and a 16 gauge shell.

However, drillings can also come in a different variety of combinations, with each manufacturer picking whatever layout they wanted or whatever the customer preferred.

Even so, there were stranger combinations available, such as the Büchsflintendrilling, where a shotgun and rifle barrel are placed adjacent to one another with a rifle barrel underneath the two barrels.

The rarest type of drilling is unarguably one with three shotgun barrels of matching calibers, but this is a point of debate for some as it does not follow the norm of standard drillings that have a shotgun and rifle barrel, and is said that these triple-barreled drillings are in fact odd variations of double-barreled shotguns. These types of drillings are known as either Flintendrillings or Schrotdrillings. 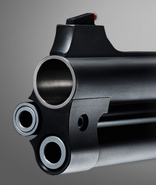 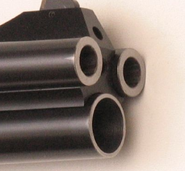 Vierling is a German word meaning "quadruplet", and are unarguably the rarest of all combination guns. These, like the drillings, come in various configurations, with the most common being two 12 gauge shotgun barrels adjacent to each other, with a .22 caliber rifle barrel above and a high-caliber rifle barrel below the two shotgun barrels. Vierlings are almost always custom made for high-end markets.