The Crogar M-91 is a Croatian insurrectionist submachine gun.

The year was 1991. The dissolution of Yugoslavia left Croatia with little weapons to arm their troops in time for said country's war of independence. An embargo prevented the newly formed state from legally buying weapons from across seas, which left Croatia with no choice but to design their own weapons, leading to the Crogar. The weapon, while based on dated designs, was apparently liked by its users. The weapons were produced by S.K.M. (now known as Lindap SKM d.o.o.), a company known for the production of water pumps, valves and corrugated roofing;[1][2] very few were produced and it was claimed to be a very popular weapon amongst Croatian insurrectionists.[3]

The Crogar is a very crudely-designed submachine gun with wooden furniture and uses blowback as its principle of operation. The weapon appeared to copy characteristics from older submachine guns, although the characteristics it copied were not as obviously copied unlike other designs, such as the Jelen or Šokac; the weapon is also select-fire and was capable of shooting in single shots or fully-automatic fire, as evidenced by a small switch on the weapon. Little documentation about the weapon's workings exists other than the above. 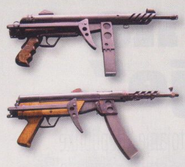 Retrieved from "https://guns.fandom.com/wiki/Crogar_M-91?oldid=66644"
Community content is available under CC-BY-SA unless otherwise noted.