The Dardick revolver concept was conceived by David Dardick in 1949. Dardick spent the next few years refining the design and established the Dardick Corporation in Hamden, Connecticut, to produce and market the gun in the hopes of scoring sales with law enforcement agencies. The Dardick pistol was introduced to the market in 1954, and was offered in a variety of models, retailing at $99.50 - very expensive compared to other contemporary revolvers. The high asking price of both the pistol and the ammunition, which was incompatible with any other kind of gun, ensured that the Dardick failed to achieve success and in the face of poor sales, it was discontinued in 1962. Dardick then sold the design rights to another company, who briefly developed the concept further before it was finally abandoned.[1][2]

The Dardick pistol was a particularly unconventional design that used a proprietary type of ammunition, known as the "Tround", which basically consisted of a .38-caliber bullet encased in a triangular polycarbonate sleeve. The "Tround" was specifically designed to facilitate the Dardick pistol's unique feeding mechanism. The Trounds were carried an internal magazine that was stored in the pistol grip. Once the magazine was loaded, the first Tround would then be fed vertically into a rotating revolving cylinder with three open-top triangular chambers. As the hammer came back, the cylinder would rotate so that the loaded chamber would be in line with the barrel and the hammer. Upon firing, the hammer would strike this chamber and discharge the Tround. When the trigger was pulled again, the cylinder would rotate back to its original position, loading a new Tround and ejecting the spent one through the ejection port. Only two chambers could be loaded at any one time.

The Dardick pistol featured an interchangeable barrel and could be adapted to chamber .22-caliber Trounds.[3] 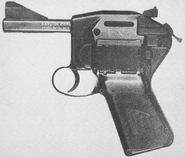 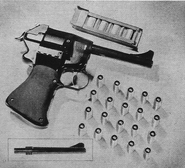