The EMP-44 was a German submachine gun produced by ERMA Werke.[1]

The EMP-44 was originally conceived by Erma in late 1942, in response to concerns that the materials required to continue mass production of the MP40 were becoming increasingly scarce and expensive. The concept behind the weapon was a cheap and easy-to-produce submachine gun that would offer similar performance to the MP40. Erma forwarded a proposal to the Wehrmacht in 1943, offering an inexpensive production run of these guns in place of MP40s, but the Wehrmacht were put off by the weapon's crude appearance and denied the proposal.

Only in 1944, when the situation in Germany became increasingly desperate, did Erma begin production of the weapon as the MP44. A limited production run was completed before the Erma factory was captured by the Soviets, and at least some of the guns were shipped out to be issued, likely intended for Volkssturm units. However, the shipment was intercepted by American forces and none of the guns made it into German hands. After the war it was analyzed by the US Army at the Aberdeen Proving Ground and the British Army at Enfield. British commentators were unimpressed with the weapon's rudimentary build but considered it functionally decent.

The EMP-44 was a very basic blowback-operated submachine gun constructed from cheap tubular components and simple welds. The entire body of the weapon, encompassing the barrel, receiver, and stock, was a single steel tube. It used the twin magazine feed of the MP40/II, allowing the weapon to feed from two separate magazines. The barrel had basic rectangular perforations and a large, rudimentary muzzle brake, and the stock consisted of a tubular strut. 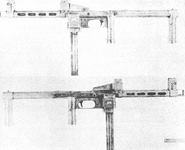 Retrieved from "https://guns.fandom.com/wiki/EMP-44?oldid=71721"
Community content is available under CC-BY-SA unless otherwise noted.