STANAG magazines
The Fusil automático Bogotá (FaB 556) is a homemade assault rifle of Colombian origin that was found in Bogota, hence the name. Only one example has been known to exist.

The Fusil automático Bogotá is a 5.56x45mm NATO caliber automatic rifle fed from 30 round STANAG magazines. It uses a form of simple blowback operation with the opening delayed by a heavy bolt as a substitute for a locked breech, To ease the gas pressure, the weapon comes with a carbine length barrel. The receiver of the Fusil automático Bogotá is a round section receiver made from a large tube to house the telescoping bolt covering the whole barrel. The barrel is held in a trunnion at the front of the receiver acting as the muzzle. The cocking handle is on the right side angled upwards. Sights are copied to an extent from the M16 as well as its fixed tube stock. The weapon fires from an open bolt in full auto only. 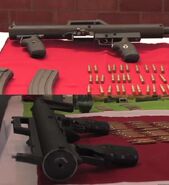