The Fire Control Group or FCG is the part of a firearm responsible for the motion of the trigger, its potential to be stopped by the safety, and the eventual release of the hammer or striker.

It is generally composed of the hammer or striker, the trigger, the disconnector, and the sear. If the firearm is a select-fire weapon, there may be more than one sear, and there will also be a selector switch which allows the safety to be integral with the FCG. 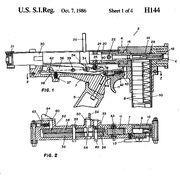 Patent of an FCG using a striker.