The flintlock mechanism or flintlock was type of gunlock invented in Europe in the mid-1500s, and succeeded the matchlock and the wheellock.

By the 1630s one version developed in France in 1610 by the French gunsmith Marin le Bourgeoys became popular through most of Europe and the world and was in use until the mid 1800s. This version is today known by collectors as the true flintlock or simply the flintlock to distinguish it from the earlier forms of flintlock, the snaplock, the snaphaunce, the doglock and the miquelet. Most of these earlier flintlocks went out of use by 1700, except the miquelet, that was developed in Spain in the late 1500s and became popular in the countries around the Mediterranean Sea, Russia, and the Spanish and Portuguese colonies until the mid 1800s.

The so-called true flintlock developed in France was adopted by the English Army during the 1660s, replacing the doglock which had been used in the English Civil War in 1642 to 1651. The iconic Brown Bess musket became the best known true flintlock and was used by the British Army from 1722 to 1838. Flintlocks were used by both sides and their allies during the American Revolutionary War in 1775 to 1783.

The flintlock mechanism was gradually replaced in the early to mid-1800s by the caplock mechanism in the Americas and Europe, although it continued to be the main form of firearm in other parts of the world after 1850. Even in the United States, where the caplock was invented in 1810, some thousands of flintlock muskets were used in the first year of the American Civil War 1861.

After the weapon had been fired, the wielder, would load gunpowder down the barrel, along with a projectile wrapped in either cloth or paper. Next, the wielder would cock the hammer containing the flint, then the wielder would load black powder into the flashpan, and secure the frizzen down on the pan. Then when the wielder pulled the trigger, the hammer with the flint would strike the frizzen, exposing the flashpan, and at the same time creating sparks, which ignited the powder in the pan, which then ignited the main powder in the barrel, then firing the projectile out of the barrel.

The snaphance was actually an early version of the flintlock, which was invented around 1570, that is mainly labeled as the main flintlock invention in timelines. It utilized the same parts as a regular flintlock, though instead of a frizzen (which also covered the flash pan), it used a part that was mearly a shaped piece with a steel face, which the hammer with flint struck, which made sparks that ignited the powder in the flash pan.

Differences between the snaphance and the flintlock[]

Thereare certain differences between the snaphance and the main flintlock, for instance, instead of a frizzen, the snaphance has a piece with a face of steel, (which didn't always make enough sparks to ignite the powder in the flash pan after being stricken by the hammer containing the flint); as well as the fact that the snaphance's flash pan is smaller.

A flintlock's hammer with flint, frizzen, flash pan, and trigger.

Close-up view of a flintlock before being fired. 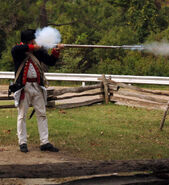 A flintlock musket while being fired.

An animated diagram of a snaphance while being fired.

An animated diagram of a flintlock while being fired. 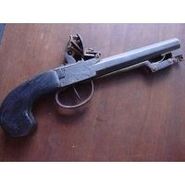 A flintlock pistol with a bayonet attached.