The Glagolev-Shipunov-Gryazev GShG-7.62 (Cyrillic: ГШГ-7,62) is a four-barreled rotary machine gun, similar to weapons such as the M134 Minigun. It is currently used in GUV-8700 gun pods, flexible mounts on Kamov Ka-29 helicopters and vehicles. It was originally developed in 1968-1970 for the Mil Mi-24 helicopter alongside the YakB 12.7mm machine gun.

The GShG-7.62 is a self-powered, gas-operated machine gun of the Gatling style. It fires the same 7.62×54mmR round used in the old Mosin-Nagant bolt-action rifle. It has a cyclic rate of 6000 rounds per minute, which is particularly fast. 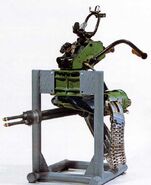 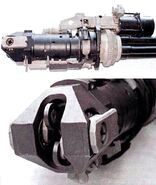 The drive operation and the bevel gear reducer of the GSH-7,62 machine gun transform the reciprocating motion of the piston into the rotational motion of the barrel block.

Retrieved from "https://guns.fandom.com/wiki/GShG-7.62?oldid=92218"
Community content is available under CC-BY-SA unless otherwise noted.