The Garand Model 1919 is a prototype semi automatic rifle/light machine gun. The weapon was used during the development of the M1 Garand.

The first model of 1919 was actually intended as a magazine fed, full auto light machine gun using an unusual primer actuated blowback operation. The second model of 1920 still retained the primer actuated operation and turning bolt of his original patent, and made in both clip and magazine loading variants using 20 and 30 round magazines. The third model of 1921 was chambered in .30 caliber and used the similar primer actuated blowback. Unlike the Model 1920, however, which operated with a rotating bolt with front locking lugs, the Model 1921 bolt didn't rotate but locked in place at its rear which pivoted and rested before a locking shoulder in the frame. Also unlike the two earlier models (the 1919 Patent Model and the Model 1920), the Model 1921 did not use a 20 or 30 round detachable magazine. Instead, it was semi auto only and used an internal 5 round magazine in the receiver.

The fourth model of 1923 was lighter than the previous models but the primer actuated device was doomed to failure as the then new progressive burning propellant of the .30 caliber cartridge did not lend itself to this type of operation. Later in August 1923, the rifle used a straight bolt and a clip feed operation using 8 rounds. The weapon was labeled as Model 1923 but originally designated as the M1922, with the approved designation T1924. 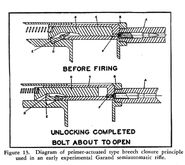 Retrieved from "https://guns.fandom.com/wiki/Garand_Model_1919?oldid=40795"
Community content is available under CC-BY-SA unless otherwise noted.