This very unusual family of close- to mid-range automatic weapons was proposed in the 1960s by Duncan Gordon. It is assumed that this family of weapons constitute a belt-fed shotgun, automatic shotgun with a box magazine, battle rifle, assault rifle and a double-barreled submachine gun with overhead inserted magazines (à la the Villar Perosa) in a very unusual configuration. Gordon has developed his weapons, based on personal combat experience he gained in Vietnam serving in the forces of SEATO.

Design drawings and the general conception of his ideas involved in the Australian company BSP Planning and Design Pty. Ltd. in Norwood. Work began on the weapon in early 1970, with Peter Chant leading the team of engineers behind the weapon. The system was developed by 1972, and drawings were submitted by accomplished engineer Dale Evans. This system was a weapon with a quick-change barrel, while the overall configuration had a mixture of ideas from the British EM-2, as well as World War II-era platforms such as the German FG 42 and the American Johnson light machine gun, with every weapon configured to be able to 7.62 NATO, 5.56 NATO, 9mm Parabellum and 12 gauge rounds with modifications. 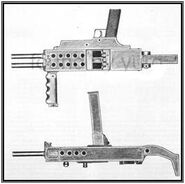 Submachine gun configuration
Add a photo to this gallery

Retrieved from "https://guns.fandom.com/wiki/Gordon_CSWS?oldid=92088"
Community content is available under CC-BY-SA unless otherwise noted.