Avtomat Horn
The Großfuß Sturmgewehr was a prototype assault rifle designed by Kurt Horn and produced by Metall- und Lackwarenfabrik Johannes Großfuß around 1945.

The weapon was designed by Kurt Horn at the Johannes Großfuß factory, which was better known for the MG 42. Nine of the prototypes were captured by advancing Red Army soldiers during the closing stage of World War II; five were eventually found at the Kummersdorf testing site. In most Soviet documents analyzing the rifle, the name of "Avtomat Horn" was given in these documents. Schematics and the designer himself were also captured by the Soviets eventually. Kurt spent most of his time in the USSR at factory number 74, now known as Izhmash.

The designer was given a few requirements for the gun, with some of them being that it had to use the blowback principle of operation, and that it had to fire at 500 rounds per minute. Because of this, Horn came up with an innovative mechanism for the gun; a gas-delayed blowback system. The idea was relatively simple: part of the gasses escaping from the chamber were redirected in the direction opposite to the rearward movement of the bolt; their pressure pushed against a piston connected to the bolt itself, thus decelerating the rearward movement of the latter. This method of operation allowed Horn to reduce the weight of the bolt to about 0.8–0.9 kg.

A similar idea was used by Karl Barnitzke in his VG1-5 rifle, but it did not work as well as planned.

As of today, only three exist today, including one incomplete exemplar residing in a museum. 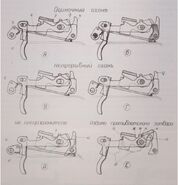