500 rpm
The H&R SPIW is a prototype assault rifle designed for the Special Purpose Individual Weapon program by Harrington & Richardson.

The SPIW program had four contenders with designs for a future assault rifle to be use in the US Army; Winchester, Springfield, AAI and Harrington & Richardson. The H&R design, of all four designs, was the most advanced. However, in spite of the weight of its triple-bored Trounds, the prototype proved itself to be too heavy at 23.9 lbs. loaded, and was quickly eliminated from the contest. The weapon was also found to be very dangerous to operate because of its revolving open chamber.

The SPIW had changes to its design to fire a .17 triplex Tround, as a prospective entrant in the Future Rifle System program, but this, too, was rejected.

The H&R SPIW used a revolving open chamber system designed by David Dardick. The only reciprocating component in the weapon was a top-mounted gas piston, which cammed a revolving cylinder at 120° (a third of a turn) with each fired shot.

The three open-sided chambers in the cylinder thus successively picked up the leading Tround of a belt of the taped-together Trounds from a drum magazine suspended below the standing breech, positioned it for firing, and then released the spent case, still in its plastic belt, down the other side of the weapon. When the chamber containing a live Tround was in the firing position, all three of its flechettes were automatically lined up with a triangular cluster of three smooth bores, which had been drilled in the weapon’s barrel.

In the open chamber concept, the body of each plastic Tround itself plays a much more crucial role in containing the forces of the explosion than does a conventional cartridge case, completely supported in a normal chamber.

The SPIW also features a three-shot, semi-automatic, revolver-style grenade launcher that attaches beneath the barrel of the weapon. The three chambers are loaded from the rear. The goal of making a modern grenade launcher was a leftover from Project NIBLICK before it combined with the APHHW (All-Purpose Hand-Held Weapon) program and evolved into the SPIW program with the goal of combining a flechette firing rifle with a grenade launcher.

The gun is also made of a combination of a translucent plastic body with steel components. 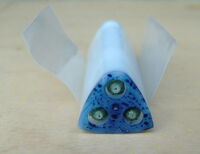 The H&R SPIW used a special triple-bore Tround with three AAI-standard, saboted 5.6mm flechettes (the same type as used in the XM144 round) inside of it, mounted in each of the three bores. When fired, these sabots were discarded early in the bores while the flechettes continued down the main barrel. These rounds have proven to be lightweight.

The load capacity of the weapon's drum magazine is twenty Trounds, and because each Tround contains three projectiles, the SPIW could achieve the effect of having a 60-round capacity.

The later FRS incarnation of the weapon used a .17 caliber triple-bore Tround.

There is a flaw with the ammunition. Because the Trounds are taped together in the drum magazine, a variation of only a few thousandths of an inch in the plastic tape would cause the Trounds to bulge excessively and split during initial function firings.

Another immediate and fundamental problem concerned the 'three-shots-at-once' theory that the weapon is based on. The three “barrels” were in fact one common space; every time the H&R was fired, gas leakage began as soon as the flechettes left their Tround. The first flechette exiting the muzzle triggered a further dramatic drop in pressure. At best, this reduced the muzzle velocity and consequently the range and accuracy of the other two flechettes. At worst, the pressure drop just might leave one or both of the remaining flechettes stuck in their respective bores, waiting to act as a serious obstruction when the next shot was fired.

Yet another problem with the SPIW is that the plastic body with the steel components made for a less than optimal weight distribution, with the barrel making the weapon very front-heavy, especially when the under-barrel grenade launcher component is attached.

SPIW with its full complement

SPIW on exhibit with a Gyrojet Mark 1 Model B carbine 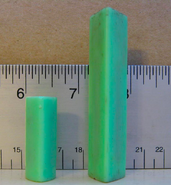 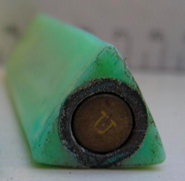