This was one of various revolver designs produced by the Liege firm of Henrion, Dassy & Heuschen. It was produced in small numbers in the 1910s and distributed under a variety of trade names.

The HDH double-barreled revolver used a large-capacity cylinder with a series of staggered chambers, made up of an inner ring of chambers and a wider outer ring. To fire off from both rings, twin firing pins were mounted on the hammer. The chambers were arranged in such a way that the gun would alternate barrels between each shot, rather than firing off both barrels at the same time. 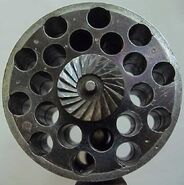 The staggered chambers of the revolver's cylinder.