The headspace is the distance measured from the part of the chamber that stops forward motion of the cartridge to the face of the bolt or slide assembly. 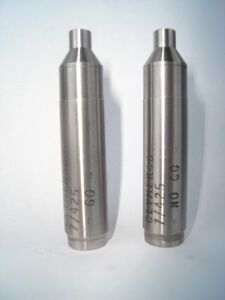 Technically there are two parts to the headspace; the head and the space. Here is the head on for several metallic cartridge cases:

The space is the distance from the head to the point within the chamber that stops the forward motion of the cartridge. The standard within the gunsmithing community for maximum headspacing is .008 in (.203mm). A space is need to accommodate mass produced ammunition. Many handloaders and target shooters can chamber their loads with zero space. However, it is unlikely that a zero space handload will chamber in another firearm with the same chambering.

The head plus the space equals the headspace

A gunsmith uses headspace gauges to determine the correct headspace for a firearm. They are known as the Go gauge and No-Go gauge. A Go gauge is ground to the minimum SAAMI and/or CIP standards. The Go gauge is the shortest of the three types of headspacing gauges. The Go gauge should just chamber when the action is closed. The No-Go gauge is ground to a maximum of eight thousands of an inch (two hundred three thousandths of a millimeter) longer than the Go gauge. The No-Go gauge should not be able to chamber and the action should not be able to close. If so there is excessive headspacing and this may lead to shooter and firearm damage.

The third type of headspace gauge is the Field gauge. Some military firearms require field headspacing due to heavy field use and the mass production of ammunition world wide. An example is the M2 Browning Machine Gun. The Field gauge is ground ten thousandths of an inch (two hundred fifty four thousandths of a millimeter) longer than the Go gauge. This longer Field gauge is used under the extreme conditions of battle in the field of combat to ensure the proper cycling of a firearm.

Retrieved from "https://guns.fandom.com/wiki/Headspace?oldid=34454"
Community content is available under CC-BY-SA unless otherwise noted.