The CAWS program started in the early 1980s in the United States. The main goal of this program was to develop a new generation personal firearm, capable of firing high-impulse, multiple projectiles with effective range of 100–150 meters.

One of the teams entered in the CAWS competition was the Heckler & Koch Germany, coupled with Winchester-Olin. Heckler & Koch was responsible for developing a firearm, while Winchester-Olin was responsible for the development of new types of ammunition suitable to fire from it. The prototype would compete with the AAI CAWS. Although tested by the U.S. military, the CAWS program was canceled, and production of the weapon, both military and civilian, has halted.

The Heckler & Koch CAWS is a select-fire, recoil-operated bullpup shotgun, with three modes of fire: SAFE, SEMI, and AUTO (S-1-F). It is chambered for 12 gauge shotgun shells and features a 10-round detachable box magazine. However, rather than using standard 12 gauge ammunition, the CAWS was designed around a belted case shell that fired tungsten alloy buckshot. The CAWS ammunition is incompatible with standard 12 gauge shells as a result of much higher gas pressures and different case geometry.

The CAWS came in several different barrel lengths, varying between 457mm (approximately 18 inches) and 685mm (approximately 33 inches). Some of the prototypes came equipped with a foregrip. The charging handle is on top of the weapon underneath the integral optic sight.

The 18.5x76mmR cartridge was a specialized shotgun shell belted at the base to prevent rounds from being loaded in other similar gauge shotguns for safety reasons, due to having a higher pressure propellant than normal shotgun shells. Early payloads for the cartridges were flechettes but these proved to be too unstable and inaccurate. The loadout would be switched out for lead and tungsten buckshot that could penetrate pine boards ¾ of an inch thick and punch through mild steel plates at 150 meters, respectively.

Initially, the shell cases were made out of brass, though high-strength plastic cases with brass and aluminum bases would be made to lower the weight of the ammunition. Winchester/Olin were also developing more exotic munitions for the H&K CAWS such as fragmentation, incendiary, and explosive rounds before the CAWS project was ultimately terminated by the U.S. military.

Brass cartridge with buckshot loadout that could come in either lead or tungsten. 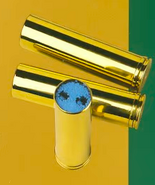