930 m/s
The Heckler & Koch G11 is a prototype assault rifle made by Heckler and Koch. It was developed during the Cold War to replace the G3 battle rifle in West German service; this never came to fruition. It uses caseless ammunition which is a rarity among firearms.

Although the weapon was a technical success, it never entered full production due to the political changes of German reunification and lack of a procurement contract.[1]

The G11 project was first created by Mauser GmbH in the 1960s. The Mauser G11 fired 4.75×21mm caliber caseless rounds from an internal 10-round helical magazine. It was trialed and rejected by NATO, but the project was overtaken by Heckler and Koch shortly afterward.

Another entrant made by Industriewerke Karlsruhe (IWK) developed in the early 1970s had 3 vertical staggered barrels. Simplicity of the IWK G11 was ensured by the fact it used interchangeable revolving 51-round drum magazines. Such a system, in addition to ease power supply circuit, high stability and provide ammunition to both mechanical stress and overheating when shooting, in fact the rifle was chambered in so much as there were leftover rounds in the magazine. The price paid for this simplification, is that the weapon was too heavy, and the dimensions of the drum magazines, as well as the three barrels and the impossibility of automatic fire found in assault rifles, the IWK G11 rifle shot either single shots or volleys in three instant shots.

The Heckler and Koch G11 was originally slated to replace the aging G3 rifle. Designed by Gesellschaft für Hülsenlose Gewehrsysteme, also known as GSHG, a conglomerate of companies consisting of Heckler & Koch, Dynamit Nobel and Hensoldt Wetzlar, initial production of the G11 began in the 1970s and field testing began in the 1980s. In March 1987, after 14 different prototypes, the G11 (later re-designated as the G11 K1) entered trial production. The design was modified further, and in 1988, the G11 K2 carbine was developed and introduced. Tests in 1989 proved that the G11 K2 boasted 50% improved accuracy over the G3.

By 1991/2, the project was completed and was adopted by the Bundeswehr with an order for 300,000 rifles placed for the period between 1990-2002. However, with the reunification of Germany the project stumbled as it became clear the budget would not exist for even the original order, nevermind the additional G11s required to replace the Soviet-issue rifles of the 108,000-strong East German Landstreitkräfte of the Nationale Volksarmee. The rifle was struck from the procurement list in 1992 and by 1993 had been totally cancelled, in part because it could not be modified to fire the NATO-standard 5.56mm round. Instead of the G11, the G3 was replaced by a more conventional rifle, the Heckler & Koch G36.

A variation of the G11 resembling the G11 K1 was entered in the Advanced Combat Rifle program held in the United States of America, along with three other contestants in the 1980s, with the winner of the program replacing the M16A2. However, none of the four contestants were deemed "good enough". The U.S. Army was looking for 100% improvement in first-hit probability over the M16A2, which was perhaps too lofty a goal for such a program.

There were a total of 266 G11 weapons produced (numbered 0 through 265), all of which being prototypes and testing devices.

The rifle features a unique cylinder breech/chamber system that rotates 90 degrees. The cartridges in the magazine are located above the barrel, pointing downward. Prior to each shot, a cartridge is pushed down from the magazine into the chamber, and then the chamber rotates 90 degrees to align the cartridge with the barrel. After that, the cartridge is fired and the chamber rotates back, ready for the next cartridge. Dud cartridges are ejected from a port in the bottom of the rifle, pushed out of the chamber by the next cartridge. The breech can be manually primed by the rotating handle at the side of the rifle, located beyond the pistol handle. The priming handle does not move when gun is fired.

When firing in three-round bursts, the second and third cartridges are fed and fired as soon as the chamber is ready for it, and the third bullet leaves the barrel prior to the moment the housing comes to its rearward position. This results in a very high rate of fire with the three-shot bursts - around 2000 rounds per minute. This also results in the actual recoil affecting the rifle after the last bullet in the burst is fired, which increases accuracy and makes for tighter groupings.[2]

While the G11 used caseless ammunition, the caliber had, in fact, evolved over time during the weapon's development. Prototypes of the weapon, along with the G11 K1, used 4.7×21mm (G11 prototypes #5 and #6), 4.3×21mm, and 4.9×20.4mm caliber rounds where the projectile sticks out the front of the propellant body. These prototypes had problems with the bullet breaking off the propellant block if handled roughly. The G11 K2 carbine used the more well-known 4.73×33mm caliber round, which had the projectile telescoped within a redesigned propellant body. The ACR variation of the weapon fired a 4.92×34mm caliber round, also of a telescoped configuration.

In the older versions of the ammunition, the solid propellant body was made of compressed NC gunpowder, until they had switched to HITP (high-ignition temperature propellant) by the time that the 13th prototype was developed.

There were also variations of the rounds designed to combat the G11's cook off problems, from aluminum foil being wrapped around the propellant body, to silver-coated propellant bodies. 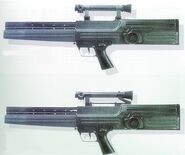 Retrieved from "https://guns.fandom.com/wiki/Heckler_%26_Koch_G11?oldid=92956"
Community content is available under CC-BY-SA unless otherwise noted.