The LMG11 is an extension of the G11 design into an LMG format. A list of desired characteristics were proposed and the design followed up on them;

The weapon has an incredibly large capacity, with 300 rounds of 4.73×33mm caseless ammunition in a 25×12 rectangular "package," individually pushed, rotated and loaded into the firing mechanism. The magazine is loaded in from the rear. The "package" was said to not use springs: engineering diagrams do not make it particularly clear how it functioned.

The weapon combined the G11 mechanism with a revolver cannon-style action, with a 3-chamber pre-feeder loaded from the magazine. This was intended to assist cooling.

It is not known how much of the LMG11 project was developed. At least a few firing prototypes were believed to have existed and were tested.[1]

Diagram for the mechanism 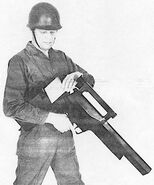 Retrieved from "https://guns.fandom.com/wiki/Heckler_%26_Koch_LMG11?oldid=73874"
Community content is available under CC-BY-SA unless otherwise noted.