20- to 40-round detachable box magazine

735 m/s (with Fiocchi CPS Black Tip ammunition)
The MP7 is a German PDW manufactured by Heckler & Koch and chambered for the 4.6×30mm cartridge.

Key advantages of the MP7 include extremely compact size, high rate of fire, and the capability of piercing body armor. Major disadvantages, which make this weapon unsuitable as a primary weapon, include a lack of stopping power and range.

The MP7 was designed in conjunction with the new cartridge to meet NATO requirements published in 1989 calling for a personal defense weapon (PDW) class firearm with a greater ability to defeat body armor than current weapons, which are limited due to the use of conventional pistol cartridges. The MP7 went into production in 2001. It is a direct competitor to the FN P90, also developed in response to NATO's PDW requirement.

The weapon has been revised since its introduction and the current production version is the MP7A1. It acts as a scaled-down assault rifle using the same action as H&K's highly popular G36. Its newly-designed 4.6×30mm cartridge is specially designed and armour-piercing with a muzzle velocity nearly as high as that of the 5.56×45mm NATO cartridge used by many modern rifles, including the M16 and SA80. [1] 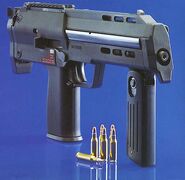 An MP7A1 with scope, extended stock and suppressor

Retrieved from "https://guns.fandom.com/wiki/Heckler_%26_Koch_MP7?oldid=90326"
Community content is available under CC-BY-SA unless otherwise noted.