The Hispano-Suiza HS.404, also known as the Birkigt type 404 after designer Marc Birkigt, was 20mm calibre automatic cannon that was one of the most famous and widespread aircraft weapons of the 20th century, used by British, American, French, and many other military services.

Firing a 20mm diameter projectile, it delivered a useful load of explosive from a relatively light weapon. This made it an ideal cannon for use onboard fighter planes, replacing the multiple 7.62mm (.30 caliber) machine guns commonly used in military aircraft in the 1930s.

The Hispano cannon was developed by the French company Hispano-Suiza. It was based on the earlier Swiss Oerlikon FF S weapons, which the company had manufactured under license in France as the HS.7 and HS.9.

In the late 1930s, engineer Marc Birkigt designed a new and much improved version with a revised action, a much faster rate of fire, and a somewhat higher muzzle velocity. The result was the Type 404, or HS.404, which was widely considered the best aircraft cannon of its kind. The 404 was widely used on pre-war French designs, notably in installations firing through the drive shaft of the Hispano-Suiza 12Y engine, a system known as a moteur-canon employed in Morane-Saulnier M.S.406 and Dewoitine D.520.

The HS.404 was fed by drum magazines that could accommodate at most 60 rounds. Since in most installations the magazine could not be switched during flight, the small ammunition capacity was problematic. In 1940, Hispano-Suiza was developing a belt-feeding system, as well as derivatives of the HS.404 in heavier calibres such as 23mm, but all these projects were halted with the German occupation of France.

Meanwhile, Great Britain had acquired a license to build the HS.404, which was first used in a British fighter as the Hispano Mk.I with the Westland Whirlwind of 1940. British engineers developed a belt-feeding mechanism. The new design was adopted by the RAF and FAA in 1941 in a slightly modified form as the Hispano Mk.II.

Four cannons replaced the eight Browning .303 machine guns in the Hawker Hurricane Mk. IIc and in Supermarine Spitfire Mk. Vc, and became standard armament in late-war British fighters such as the Hawker Typhoon/Tempest family or late marks of the Spitfire. Although earlier Spitfires equipped with Type C wings could accommodate four cannons, most of them carried only two because of technical difficultiesm such as inadequate gun-heating capacity for the outboard cannon leading to the gun freezing at high altitudes.

The gun was also licensed for use in the United States as the M1, with both the United States Army Air Corps (USAAC) and U.S. Navy planning to switch to the 20mm as soon as sufficient production was ready. A massive building program was set up, along with production of ammunition, in 1941. When delivered, the guns proved to be extremely unreliable and suffered a considerable number of misfires, due to the round being lightly struck by the firing pin. The British were interested in using this weapon to ease production in England, but after receiving the M1, they were disappointed. In April 1942, a copy of the British Mk.II was sent to the U.S. for comparison, with the differences being primarily that the British version used a slightly shorter chamber that they believed was the cause of the U.S.’s problems.

The U.S. declined to modify the chamber of their version, but nevertheless made other different modifications to create the no-more-reliable M2. By late 1942, the USAAC had 40 million rounds of ammunition stored, but the guns remained unsuitable. The U.S. Navy had been trying to go all-cannon throughout the war, but the conversion never occurred. As late as December 1945, the Army’s Chief of Ordnance was still attempting to complete additional changes to the design to allow it to enter service.

In the meantime, the British had given up on the U.S. versions and production levels had been ramped up to the point where this was no longer an issue anyway. They upgraded to the Hispano Mk. V, which had a shorter barrel, was lighter and had a higher rate of fire, although at the expense of some muzzle velocity. One of the main British fighters to use the Mk. V was the Hawker Tempest Mk. V Series II, which mounted a total of four.

The U.S. followed suit with the M3, but reliability problems still continued. After World War II the United States Air Force (USAF) adopted a version of the M3 cannon as the M24, similar in most respects except for the use of electrically primed ammunition.

In the post-war era, the HS.404 disappeared fairly quickly due to the introduction of revolver cannon based on the German Mauser MG 213. The British introduced the powerful 30mm ADEN cannon in most post-war designs, and the French used the very similar DEFA cannon, both firing the same ammunition. The USAF introduced the 20mm M39 revolver cannon to replace the M24, while the Navy instead combined the original Hispano design with a lighter round for better muzzle velocity in the Colt Mk 12 cannon. 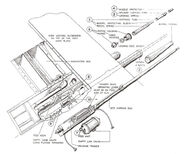 A pair of Mk. V Hispanos installed in the wing of the Spitfire Mk. 21. Shorter barrels and smaller feed motors resulted in a more compact arrangement. 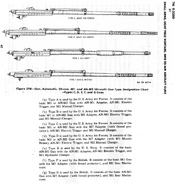 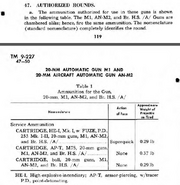 Retrieved from "https://guns.fandom.com/wiki/Hispano_cannon?oldid=73434"
Community content is available under CC-BY-SA unless otherwise noted.