Buddy (colloquial)
Hachikyū
The Type 89 (89式小銃 Hachikyū-shiki Shōjū), colloquially known as the "Buddy" (バディー Badī) in JSDF service, is a Japanese assault rifle produced by the Howa Machinery Company. It is currently the standard service rifle of the Japanese Self Defense Forces, having replaced the Howa Type 64.

The Type 89 was developed in the later 1980s to replace the 7.62×51mm Type 64, the then-standard service rifle of the JSDF. The Type 89 was designed by Howa under specifications set out by the Japanese Ministry of Defense, and was accepted into service in 1989. Since then, further improvements to the rifle have been made, including variants with folding stocks and tactical rails.

In compliance with Japanese restrictions on their arms trade, the Type 89 has never been exported to other nations, and is only used by the JSDF.

The Type 89 is a gas-operated assault rifle that utilizes a rotating bolt locking system. The weapon is a derivative of the Howa HR-15, a version of the ArmaLite AR-18 produced under license by Howa. It has a selective fire function with three modes: fully-automatic, burst fire, and semi-automatic. The burst fire mode operates on a separate mechanism to the single-fire and automatic fire modes, and as such will still be fully functional should the user encounter mechanical issues in automatic fire. Early Type 89s were produced with bipod attachments, although this feature is absent from more recent models.

The Senshin Keiryōka Shōjū (Kanji: 先進軽量化小銃, lit. "advanced lightweight rifle") variant of the Howa Type 89 is a prototype modernized version of the Type 89 that has been in development since 2007. The rifle is meant to work with the ACIES system.[1] 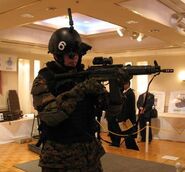 A mockup of the 2008-spec Senshin Keiryōka Shōjū version of the Howa Type 89.

An airsoft model of the 2012-spec Senshin Keiryōka Shōjū version of the Howa Type 89 produced by Tokyo Marui.