10-round Lee-Enfield magazine
20-round detachable box magazine
The Howell was a British self-loading conversion of the Lee-Enfield rifle, designed by N. Howell.

The Howell was designed during or after World War I with the intention of providing standard infantry troops with increased firepower, which would have been useful, at least in theory, in the close-quarters combat of trench warfare. However, it was turned down by the British Army on account of its lack of resiliency against the harsh conditions of the war.

From 1937 to 1940, Mr. Howell attempted to once again to interest the Army in the weapon, to no avail. During World War II, Howell proposed to the Ordnance Board that the rifle be issued to the Home Guard as an anti-aircraft weapon, although ultimately it was rejected for even this role. No Howell conversions were ever issued to British troops.

The Howell was a Lee-Enfield No.1 Mk.III with an external gas tube fitted on the right side of the weapon. The bolt handle is cut off but is retained on the gun, and is surrounded by a curved cam connected to the gas tube. When the gun is fired, the gas piston pushes the cam, rotating the bolt handle and pushing it open, before a spring pulls the bolt back in.

The sights were offset, similarly to the Bren gun, although the original Lee-Enfield sights were not removed. The trigger is modified to incorporate a new disconnector safety. It could use 20-round extended magazines or standard 10-round SMLE magazines.

The Howell rifle without magazine. 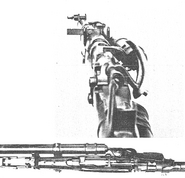 Detail of the Howell's bore and sights.

A Howell rifle on display at the Royal Armories Museum in Leeds, UK.