The Magal is an Israeli semi-automatic carbine that was produced by Israeli Military Industries.

The Magal is intended as a law enforcement firearm. Israeli police had been using the aged M1 Carbine as they minimized bullet overpenetration in urban areas, and have large quantities of .30 Carbine rounds in their inventory. The design of the Magal is credited to IMI Special Projects Manager Efraim Yaari, and is believed to have been made around 1998.

An initial production run anticipated 4,000 Magals to be produced, and an early batch of around 1,000 Magals were delivered and put to use in the Israeli-Palestinian conflicts from 1999 to 2000. However, many negative field reports came back. Most failures were due to the Magal's short barrel producing insufficient gas pressure (only worsened by riot control accessories), as well as the barrel overheating during continuous fire. The weapons were withdrawn in 2001, sent back to the factory for improvements, and no additional orders were made.

In 2001, the Brazilian Polícia Militar do Pará (Pará State Military Police) evaluated and ordered the weapon, and around 555 units were produced and delivered.

The Galil MAR, or Micro Galil, served as the basis for the Magal. The Micro Galils are rechambered for .30 Carbine, and are fitted with modified barrels, bolts and magazines. The gas system was also replaced, as the 5.56mm ammunition used in the Micro Galil produces higher pressure than .30 carbine. The bolt carrier was also changed, no longer incorporating a gas piston. Gases from the gas chamber instead directly hit the extension of the bolt carrier, which is chrome plated at the top to make cleaning easier.

Externally, the Magal is extensively modified compared to the Micro Galil. The firing mechanisms are housed within a one-piece polymer lower receiver, which included the pistol grip, hand sized trigger guard, magazine housing, and handguard. An opening in the jacket below the barrel allows the addition of a flashlight.

The Magal can be equipped with the M203 grenade launcher by disassembling the jacket. The Magal can use less-lethal rubber bullets by attaching a riot control accessory to the muzzle. 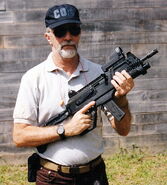 Retrieved from "https://guns.fandom.com/wiki/IMI_Magal?oldid=80550"
Community content is available under CC-BY-SA unless otherwise noted.