Not to be confused with the Jeziorański EM-2.

The EM-2, officially the Rifle No.9 Mk.I, was a British prototype assault rifle designed by Stefan Janson and produced by RSAF Enfield. Chambered for the intermediate .280 British cartridge, the EM-2 showed initial promise and was slated to be adopted by the British Army in 1951, but the project was soon cancelled for political reasons.

In the immediate post-World War II era the British Army, like many other forces, started research into their own assault rifle. The British Army had originally planned to replace their .303 inch rimmed cartridge before World War I, but were forced to keep it due to time and financial constraints for another 30 years. With these constraints removed, they developed a new .280 inch (7mm) intermediate-power round, and set about developing a new rifle to fire it as well as considering a machine gun using the same round, the Taden gun. At the same time Fabrique Nationale de Herstal expressed considerable interest in the round, and started development of their own rifles based on it. The Canadian Army also expressed interest in the new round, both to maintain commonality with the British, and to modernize their forces.

The Royal Small Arms Factory (RSAF) at Enfield started working on four designs of which two generally similar designs known as the EM-1 and the EM-2 (the "EM" standing for Enfield Model) came to the fore. The nomenclature was made official on January 6, 1948. Both were unofficially named after the lead designers in each team and were known as the Thorpe and the Janson respectively (Stefan Kenneth Janson was an assumed name of the Polish firearm designer Captain Kazimierz Januszewski).

Both were bullpup style weapons; the magazine and chamber are placed behind the trigger and pistol grip, leading to a shorter overall length (by about 20%) and a better ratio between barrel length and weapon length. Both used 20-round magazines with "stripper" reloads (as opposed to box magazines), included simple conical optical sights for fast aiming, and had a carrying handle built into the top. They could fire semi-automatic or fully automatic. The .280 round was accurate to about 800 yards (730 metres). The two designs were very similar looking, using the same sight but otherwise differing primarily in details. The EM-1 used steel plate pressings for simpler manufacture, though if anything was slightly heavier.

The EM-2 was eventually selected as the better design, and was adopted as the British Army's new rifle on April 25, 1951 as the Rifle, Automatic, Calibre .280, Number 9, the designation by which it had been known in the War Office since the American weapons tests of 1950.

It was at this point that the US put forth its own designs for NATO standardisation, using the .308 inch (7.62mm) round in their M14 rifle in a prototypical stage as the T25. Matters came to a head in 1951 in a shoot-off conducted at the Aberdeen Proving Grounds, with the US claiming the British round was underpowered, and the British claiming the US round was too powerful to be used in a full-automatic mode. At the same trials the .280 FN FAL was also tested as the T48. A series of lengthy debates followed, which were finally settled in an unlikely fashion when Canada stated they would use the British .280 round, but only if the US did as well. It was clear this would never happen. Winston Churchill felt a NATO standard was more important than any qualities of the weapon itself and overturned the decision by the previous Labour Minister of Defence, Manny Shinwell who had already announced an intention to move to the .280. During this time, prototype EM-2s were rechambered to several different calibres, including a variety of experimental 7mm cartridges, as well as the .30-06 Springfield.

The EM2 could not be easily adapted to the powerful .308 round, so instead the British were forced to adopt a licensed version of the FN FAL from Fabrique Nationale. The FAL was itself a re-chambered for the 7.62 mm adaptation of FN's own design for a rifle using the .280 cartridge but was found better to handle the more powerful round. Churchill had hoped that with the British Commonwealth and other NATO countries adopting the FN FAL, the US army would do so as well. In the end it adopted the T44 as the M14, which had replaced the earlier T25 experimental weapon.

In time, the British concerns were proven true and NATO agreed to move to a smaller round more suitable for full-automatic fire and lighter weapons. However, in spite of having a similar appearance due to its bullpup layout, the SA80 currently used by the British Army is not mechanically related to the EM-2, rather it is essentially a bullpup Armalite AR-18. However, the idea of an Infantry Personal Weapon in conjunction with a larger calibre squad machine gun which led to the design of the EM-2 would be reflected in the SA80 system. 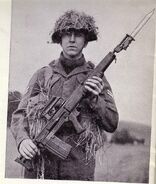 Photograph of a bayonet-equipped EM-2 held by a soldier.
Add a photo to this gallery

Retrieved from "https://guns.fandom.com/wiki/Janson_EM-2?oldid=82548"
Community content is available under CC-BY-SA unless otherwise noted.