"Enfield Model B" (False)
The Jurek Mk.II was a British prototype submachine gun that was designed by Marian Jurek.

The Mk.II submachine gun was developed by Marian Jurek of the 16th Independent Armoured Brigade while he was posted in West Germany in late 1945. Tests for the weapon were arranged in October 1946 at Cheshunt, England and the gun was said to have performed well. The Ordnance Board considered the Mk.II to show some promise but were more invested in other designs, such as the Patchett and BSA SMG.[1]

After being discharged from the British Army after the war, Jurek took up permanent residence in Britain and remained in possession of his prototype submachine guns. In order to comply with national gun laws, he converted the weapons into semi-automatic carbines by removing the trip levers and then sold them to a gun dealer, who made several aftermarket modifications to Jurek's designs, including fitting a wireframe fixed stock and a long barrel. The guns were then sold to the Services Armament Corp. in the United States, who may have planned to put them into production but nothing came of this.

Today, Jurek's Mk.II prototype is held at the Defense Technology Museum in Koblenz, Germany, where it is incorrectly attributed to RSAF Enfield and labelled as the Experimental Model B, with no mention of Jurek.

The Jurek Mk.II was a blowback-operated submachine gun that used a unique bolt delay. Behind the bolt was a spring-loaded hammer that would only strike the firing pin if the breech was completely closed. The hammer spring, which was located in the pistol grip, worked on delay to allow the bolt to completely settle in place before firing. This way, the fire rate was very low at 350rpm but recoil was negligible and the gun could be fired accurately with ease.

The barrel of the Mk.II submachine gun was taken from a Sten Mk.V, and it fed from 32-round Sten magazines, although the Ordnance Board's illustrations of the weapon show it feeding from a shortened 20-round magazine. Originally, the prototype was fitted with a canvas-covered stock that could double as a holster, similar to the MCEM-2, however later aftermarket modifications of the gun saw it fitted with a basic wireframe stock, which remains in place today.

The Jurek Mk.II with aftermarket modifications. 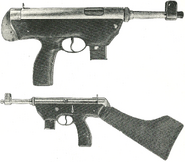 The Ordnance Board's sketches of the Jurek Mk.II.

The Mk.II prototype today, at the Defense Technology Museum in Koblenz, Germany. Note that the information provided on the placard is incorrect.