The SUB-2000 is a 9x19mm Luger or .40 S&W pistol-caliber carbine manufactured by American firearms manufacturer Kel-Tec. It has the rarely seen feature of folding end over end for compact storage and backpack carry.

The SUB-2000 was designed with versatility in mind, first being introduced in the year 2000, as indicated by its name. Around 70% of the outer furniture and receiver are made of a high strength polymer, with the buffer tube made of aluminum and the barrel and front sight made of typical steel, with the rear sight constructed out of polymer. It is a Direct impingement blowback weapon, a common feature in pistol caliber carbines, and arguably necessary to make its folding body practical.

The weapon is operated the same between the Generation 1 and Generation 2 SUB-2000 carbine. The trigger guard can be pressed downward with the user's firing hand, which then unlocks the barrel from the rest of the mechanism, and is folded rearward until a small lug near the muzzle (Location of which depending on if it is a Gen 1 or Gen 2) catches the barrel and locks it in place. Likewise, a small latch near this locking location is pulled away from the lug in order to unlock the barrel, thus allowing it to unfold once more, but the trigger guard briefly swings open upon meeting with the barrel assembly and can catch the user's hand if not moved out of the way first.

It loads via the pistol grip, much like any modern semi automatic handgun, chambered in either 9x19mm Parabellum/Luger or .40 caliber Smith & Wesson, depending on the user's preference. The frame works for both calibers, but the bolt and barrel require changing before switching between them. The charging handle is located on the bottom of the buffer tube, a small cylindrical knob that faces downward, which offers a stiff resistance when pulled to the rear. It can be locked to the side, not unlike the G3 family of weapons. It is recommended procedure when reloading the weapon to lock the charging handle in such a way because, much like an MP5, it can prove difficult to force in a magazine with the bolt closed. After inserting a magazine, the bolt can then be "slapped" home by pulling, or pushing, depending on which hand is used, it away from the locking recess, sending the bolt forward and chambering a round. A crossbolt safety switch is featured directly above the pistol grip, rendering the trigger inert.

The weapon cannot be chambered when folded, as the round would fall out when folding it for storage, however the charging handle will still operate.

Internally, it works the same as any direct impingement AR-15 platform pistol caliber carbine, such as the Freedom Ordnance FX-9, despite the unusual nature of the controls.

The Generation 1 SUB-2000 was introduced in the year 2000, a relatively novel concept, one that had only been seen in military-exclusive prototypes at that time. It was relatively bulky for its size, due to the large polymer handguard.

The Generation 2 SUB-2000 was introduced in 2015 and sported a number of changes. The most obvious of these changes was the front handguard being slimmed down, a picatinny rail added onto both the top and bottom of the guard, with an M-LOK attachment system on the sides for reduced weight. Additionally, the buttstock was widened and given the ability to be adjusted between three positions via a pin over the top of the butt. Most notable of the changes was that it could now take Glock 9mm or .40 caliber magazines, with one additional model being able to take multiple different types of magazines, according to Kel-Tec's website. The attachment point for the barrel when folded was moved from the front sight to the end of the handguard, just in case it took a bump or two, and the grip, to accommodate the nature of Glock magazines, was straightened and given a simplified square pattern for increased grip. At the end of the modifications, a suppressor thread was added, capped by a knurled threat protector out of the box. 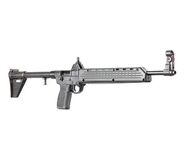 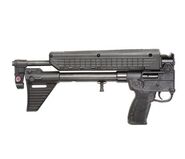 The SUB-2000 folded
Add a photo to this gallery
Retrieved from "https://guns.fandom.com/wiki/Kel-Tec_SUB-2000?oldid=90480"
Community content is available under CC-BY-SA unless otherwise noted.