After leaving Bérgom S/A, Nelmo Suzano, with 2 other associates, financed a new company called LAPA (Laboratório de Projetos de Armamento Automático) and set on to make a family of 3 guns, a assault rifle chambered in 5.56mm, the FA-03, a .22 LR carbine called the CA. M2 and a submachine gun called the SM-03. The latter was sent to the Marambaia testing site where the Brazilian army ran 6,500 rounds through it; the gun passed and got the coveted ReTEx report in 1992. Eventually LAPA went bankrupt when the family of guns failed to find any buyers and only one SM-03 was ever made.

The SM-03 is a standard blowback 9mm submachine gun that was entirely made of synthetic material, making it very lightweight and handy. 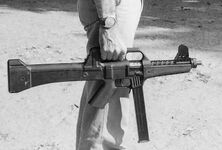 SM-03 being held by it's carry handle. 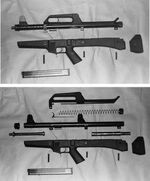