869 meters per second
The M134 Minigun is a six-barreled electrically powered rotary gun that was developed by General Electric.

The M134 is a derivative of the M61 Vulcan scaled down to fire the 7.62 mm NATO rifle cartridge. It was designed to provide a high volume-of-fire weapon suitable for firing from an unstable platform, specifically a helicopter. It was initially developed as the "Mini-Vulcan," with the name slowly becoming "Minigun" over the course of development.

Attempts to produce an even smaller, potentially man-portable variant resulted in the XM214 Microgun chambered in 5.56 mm NATO: while this version was functional, it was never adopted due to a lack of any perceived combat role.

The M134 consists of a series of modules that attach to the outer housing of the central gun unit: these are the grips, feeder/delinker, gun control unit, gun drive motor, clutch and drive gear head.

Functionally, the gun unit is little different to Dr. Richard Jordan Gatling's original design, being effectively a rack of six straight-pull bolt action rifles attached to a rotor assembly with a common ammunition feed, with cams operating their bolts as they rotate. The gun body contains the main rotor assembly and the six bolts: the barrels thread into the front of this assembly. The six barrels are stabilized at the front with a clamp assembly with several disks, the precise layout depending on the model: without this, over time torque would warp the barrels. More recent Miniguns tend to have a large cylindrical flash hider at the muzzle, with the main purpose being to reduce the effect of the weapon's muzzle flash on night optics.

The normal alignment of the weapon, when looking at the gun from the rear, has ammunition fed at the 4 o'clock position and entering the feeder/delinker, which strips and ejects the belt links. The stripped rounds are carried from here to the breech by a rotating star wheel. Barrels fire at the 12 o-clock position, and ejection of spent brass is at the 6 o'clock position. Smooth function is ensured by the application of Teflon semi-fluid lube oil on the bolts, cam track and bolt tracks.

The gun drive motor powers the drive gear head: both are mounted on the side of the gun unit. The drive gear head determines the speed at which the weapon fires: most modern manufacturers offer more than one gear head design for different rates. For example, Dillion Aero offers a 3,000 rpm and 4,000 rpm drive gear.

The gun control unit is mounted to the back of the gun unit, and distributes power to the components of the gun and is responsible for timing the operation of the electrical mechanisms. The weapon's grips attach directly to the back of the GCU, and in most modern examples the GCU has two push-button triggers and the master power switch mounted on it. Various grip designs exist that provide intermediary mechanisms for pressing these buttons. Early GCUs were overly complicated, prone to component burn-out, and could add as much as 20 pounds to the weight of the system.

The feeder/delinker is a necessary component as the M134 has no internal belt feeder but usually feeds from standard machine gun belts: as a result, the links must be separated outside of the gun. The older MAU-56 feeder/delinker was known for being temperamental and had a solid outer housing which made dealing with stoppages a major project requiring full stripping, and was later replaced by the MAU-201/A. The clutch attaches to the feeder/delinker and controls its engagement and disengagement timing.

The gun requires an external 24 volt DC power supply of at least 58 amp current in order to function: this is usually provided by a large battery pack or a generator attached to the engine of whatever the gun is mounted on. This can prevent the weapon from firing if the host platform's electrical system is not functioning correctly: this most notably occurred in the Battle of Takur Ghar (Roberts Ridge) in Afghanistan in 2002, where the downed MH-47 Chinook Razor 03 could not return fire with its Miniguns due to damaged electrical systems.

In helicopter mountings, the gun is usually fitted with at least a set of deflectors to ensure all ejected brass and belt links are directed downwards, to prevent possible foreign object damage to the engine. Often an adaptor and long flexible ejection chute are fitted to ensure brass and belt links are ejected straight down over the side of the aircraft to eliminate the risk of hot brass bouncing around inside the cabin.

The gun takes a short time to spin up to full rate and spin down: on the 3,000 rpm M134D, for example, spin-up time is 0.5 seconds and spin-down time 0.25 seconds. Original production M134s will expel between 8 and 12 live rounds from the feeder/delinker as they spin down after firing. Newer models are usually designed to disconnect their feeder-delinker when the triggers are released but not cease firing immediately, with the idea being to clear the chambers of all six barrels first so that remaining rounds are not subject to residual heat in the barrel cluster, eliminating the risk of cook-off.

Original production variant. First production fired at a fixed 6,000 rpm, but this was found to cause too many mechanical issues and a transmission housing was added to the motor, giving a selectable fire rate of 2,000 or 4,000 rpm.

US Air Force and Navy door gun and pedestal mount variant derived from the GAU-2B/A, distinguishable by a large flash hider with horizontal rectangular slots. GAUSE-17/A sometimes appears on captioned photographs of Navy versions: this is not an official designation, and appears to be the result of appending "Shipboard Equipment" to refer to the gun and its mounting.

Variant with an additional ejection sprocket, designed for the XM53 armament subsystem of the AH-56 Cheyenne compound helicopter. Cancelled along with the AH-56.

Dillion Aero Minigun with improved components, available as either new-production or as a parts kit for existing General Electric-made M134s. M134D-T has a titanium housing and rotor to reduce weight, M134D-H has a steel housing and titanium rotor as a cost-reducing compromise. 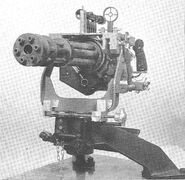 Helicopter mount with twin chutes for brass and belt links.

Ground-mounted M134 during firing trials.
Add a photo to this gallery

Retrieved from "https://guns.fandom.com/wiki/M134_Minigun?oldid=92466"
Community content is available under CC-BY-SA unless otherwise noted.