The M16 (officially Rifle, Caliber 5.56 mm, M16) is the United States military designation of the AR-15. Originally designed at ArmaLite in the late 1950s, the AR-15 was officially adopted by the US Army in 1966 after having been improved by Colt. Since then, the design has undergone several major improvements, and remains in service with all branches of the US military to this day.

The original M16 was a select-fire, 5.56×45mm rifle with a 20-round magazine. Mechanically, it is identical to the original AR-15 models (not modern models however, as modern AR-15s lack select fire), utilizing the direct impingement recoil system and a rotating bolt, except for the location of the charging handle.

As the M16 evolved into the M16A1, there were a number of useful features added to aid the rifle's user friendliness and reliability, most of said features that remained even into the M16A4 and M4 Carbine.

Rifles manufactured for export or military sales have the automatic fire control group; the selector switch has options for SAFE, SEMI, and BURST (or AUTO). These weapons are found with the M16 hammer assembly, the M16 disconnector, and a trigger assembly that allows for the auto sear to function as intended in conjunction with the auto selector switch. The M16 lower receiver has a section of its shelf milled lower to accommodate the auto sear, and an additional hole (the sear hole) is drilled into the lower receiver to hold the sear in place.

The bolt should be composed of Carpenter 158 (C158) steel for maximum durability, and should be shot peened, tested with a proof load, and MPI tested for cracks and inclusions.[1]

In adherence to the TDP (Technical Data Package), the barrel should be hammer forged from 4150 CMV (Chrome-moly Vanadium) steel. This allows the barrel to last a bit longer under the stresses of full auto fire or rapid semi-auto fire, and leaves the barrel less prone to gas port erosion and throat erosion.

The data package calls for a 1:7 twist in the M16s and M4s, which handles the heavier and longer bullets. As with the bolt, the barrel should be tested with a proof load and MPI tested to check for structural deficiencies.

The standard front sight assembly on all AR-15s is adjustable for elevation.

The standard A2 rifle front sight post is .270 inches tall, and has a square profile. It has four notches around the base of the front sight post, each notch representing 1.25 MOA in elevation.[3]

The standard A1 rifle front sight post is .260 inches tall, and has a tapered round shape. It has five notches around the base of the front sight post, each notch representing 1 MOA of elevation.[4]

The Colt Model 601, adopted by the United States Air Force in 1959, was the first model M16. Featured a 20-inch barrel with a 1/12 twist and a non-chrome lined stainless steel bore, a fixed polymer stock, a fixed carrying handle, and no forward assist. Early models did not feature a brass deflector. The lower receiver did not feature a rib around the magazine release button. The muzzle for this model was a three-prong open-fronted "duckbill" flash suppressor. The standard M16 fired in full-auto and single shots only.

The Colt Model 603, officially adopted by the U.S. Army as the M16A1. Featured a 20-inch barrel with 1/12 twist, and a chrome-lined bore and chamber. Forward assist included with this model, bird cage flash suppressor added and an external rib around the now larger magazine release. Additionally the stock was shortened and the sling swivels were more outwardly angled to allow better dexterity when slung. The fully automatic fire mode was also changed to a burst fire selector to avoid wasting ammunition during suppressive fire. Otherwise identical to M16. It was adopted by the U.S. Army in 1963 and was in use during the Vietnam war throughout the U.S. military, phasing out the M14.

The Colt Model 645, adopted by the U.S. military in 1986 as the M16A2. Features the A2-style lower with longer buttstock, the round delta ring, round handguards, the heavy "government profile" 20-inch barrel with 1/7 twist, the A2 pistol grip, a fire control group with SAFE, SEMI, and BURST functions, a longer stock, brass deflector and iron sights, with the rear sight being adjustable for windage and range (up to 800 meters). The front sight, as noted earlier, still adjusts for elevation. The buttplate was made longer from top to bottom and 30 round magazines were standard with the A2, unlike prior models.

The Colt Model 646, adopted by the U.S. Navy as the M16A3. This model was essentially an M16A2 converted to fire in full-auto, with no burst-fire provision. Early production models are still marked "M16A2". Later production models, known as the Colt Model 901, featured flat-top receivers.

The Colt Model 945, adopted by the U.S. military as the M16A4. Introduced in 1996, it is the same as M16A2, but with a flat-top upper receiver suitable for mounting optics. Features a rifle-length KAC (Knight's Armament Company) rail (RIS rail) and a slightly taller front sight block (if the gas block isn't shaved down for optics). This was once the current issue infantry rifle for the United States Marine Corps, however it was more recently phased out of frontline service by the M27 Infantry Automatic Rifle. Since then, the M16A4 has come to fill the role that the M14 rifle had when the first M16 was introduced, being used as a training rifle for new recruits to the Corps. These are now also produced by FN, alongside the M4A1.

A civilian semi automatic version of the M16A4 with modernized furniture. Other than the lack of select fire, it is identical to FN's iteration of the M16A4 (Which is most often a more modern looking model with a full rail system on the forward handguard and without a carry handle). This is internally identical to FN's other Military Collector rifle, the M4, the only differences being it is shorter (like an M4A1 is to an M16A4) and has the telescoping buttstock from its military version, said version being also provided by FN, alongside Colt.

The M16S1 was a Singapore-produced version of the M16A1, manufactured by Chartered Industries of Singapore. It was the standard Singaporean service rifle from 1973 to 1999. The M16S1 is now used mostly for ceremonial purposes. It is also held as a reserve weapon.

Export version of the M16A1 produced in the Philippines by Elisco.

XM16E1, modified version of the M16 featuring a forward assist, like the later M16A1 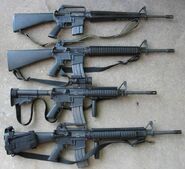 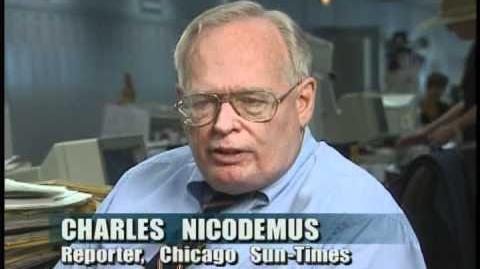 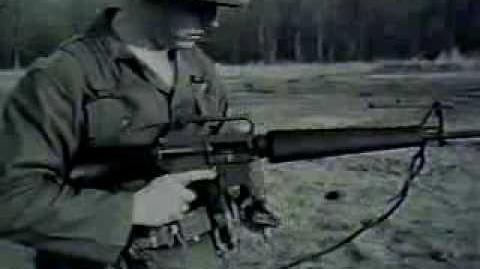