6-, 10-, and 20-round detachable/non-detachable box magazine

The Mauser C96 (Construktion 96), nicknamed the "Broomhandle", was one of the first semi-automatic pistols to see widespread use. It was manufactured from 1896 to 1937 in Germany, as well as being manufactured in direct or modified - and often unlicensed - form in other countries, such as Spain, and especially China.

The C96 is interesting in that it is entirely held together through the fit of the parts: there are no pins and only one screw in the entire gun, the latter being used to attach the grip panels.

The development of the C96 began sometime in 1893 or 1894. Most of the work had been done by the Federle brothers, who worked for the Mauser company. The final design appeared early in 1895 and had been patented by Paul Mauser, and production began in 1896. The C96 was offered to the German military, but it was rejected. However, C96 has a long and successful story on the civilian market - being offered as a pistol-carbine, it outperformed in effective range most of contemporary pistols and revolvers, being especially popular with travelers and hunters in the areas where big game animals are rare or absent at all.

The C96 first saw military action during the Boer War in South Africa (1899–1902). During World War I, the C96 had been acquired by the German Army due to the lack of the standard issue Luger P08 pistols. Many German officers preferred it to the Luger and used them as personnel sidearms. It was also been used during the World War II, usually by second line troops of the Reichswehr (German Army).

While serving as a correspondent for the Daily Mail and the Morning Post, and an embedded civilian, a young Winston Churchill had brought a C96 with him from England, and lost it when he was captured by the Boers in December of 1899.

The C96 has also been widely exported - in the 1920s, Soviet Russia purchased large quantities of the short-barreled (99mm barrels) C96s in 7.63mm, giving the name "Bolo-Mauser" (from Bolsheviks' Mauser) to all short-barreled C96s.

Many C96 clones were manufactured in Spain, mostly without any license, and mainly by Astra. In the early 1930s, Mauser engineers developed a select-fire version of the C96, the Model 712 "Schnellfeuer", which had been used in limited numbers during WWII. The Mauser C96 is a strange weapon and can also equip a stock attachment to help with accuracy.

The C96's barrel is difficult to charge due to the barrel and upper frame being a single forging: as a result, many vintage C96s originally chambered for 7.63×25mm Mauser have had their "shot out" barrels re-bored for 9mm rounds. 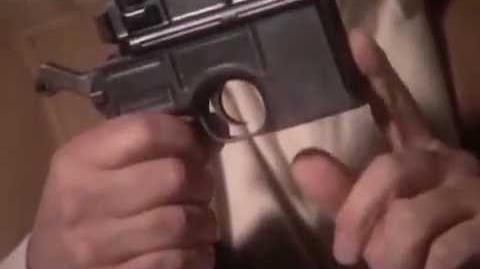 Mauser C96 semi-automatic pistol
Add a photo to this gallery

Retrieved from "https://guns.fandom.com/wiki/Mauser_C96?oldid=88832"
Community content is available under CC-BY-SA unless otherwise noted.