Metal Storm Limited was founded by Australian James Michael O'Dwyer in 1993, based in Brisbane, Australia.

James Mike O'Dwyer was an Australian inventor. In 1991, O'Dwyer sold his previous food business to develop a running shoe concept cooled by flowing air generated from ground impacts. In 1993, O'Dwyer conceived the Metal Storm concept. O'Dwyer sought investors from Australian and American sources, struggling to find an investor until Australia's Defense Science and Technical Office (DSTO) decided to collaborate with O'Dwyer and directly invest in his developments.[2][3][4]

Over the following years, Metal Storm developed and tested many experimental weapons using the Metal Storm technology. However, Metal Storm slowly sunk into economic trouble; they received no major purchasing order for their products, and their researching funding slowly dwindled.

Lacking buyers and research funds, Metal Storm requested to be suspended from trading on 20 July 2012, and was placed into voluntary administration. In August 12th 2015, DefendTex, an Australian-based Defence R&D company acquired all IPs, trademarks, technologies and assets of Metal Storm in late 2015.[1]

The ignition system for Metal Storm's early stacked projectile system is achieved via a series of piping holes drilled along the barrel. Electric wires run along the barrel, activating spark plugs and igniting the rounds in order. Later models have built-in wires running directly into the propellant charges. This method is only suitable when a barrel is pre-loaded with projectiles.

Superposed loads inherently pose the danger of a chain reaction, where the ignition of one projectile causes the unintended ignition of projectiles behind it. Metal Storm proposed two solutions to address the issue.

The first solution is deforming projectiles, in a process similar to the Minié ball. When a propellant is fired, the bullet behind it deformed and expanded, sealing the barrel. The second solution is bullet "skirts", which are similar to the design of the Russian 40×53mm VOG-25 grenades.[1]

The electronically fired design of Metal Storm allows for tremendously high fire rates due to a lack of moving parts, as well as giving them high mechanical reliability, light weight, and a compact size and shape. The use of electronic ignition can be also extended into smart, computerized gun designs.

However, Metal Storm weapons also cause other disadvantages, such as capacities limited by barrel length, variable accuracy due to changing barrel length, low-velocity projectiles, and difficult reloads.[1][6]

The Metal Storm technology demonstrator is a 36-barrel rig nicknamed "Bertha" with 5 rounds in each barrel. All 180 rounds were fired in less than 0.01 seconds, with a total fire rate of one million rounds per minute (~27,777 RPM per barrel), making it the fastest-firing gun in existence.[7] 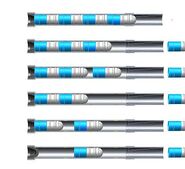