The PM-9, officially designated as the 9mm Machine Pistol (9mm機関拳銃 Kyūmiri Kikan Kenjū) or M9 is a Japanese submachine gun that was produced by Minebea.

The PM-9 was developed to fulfill the requirement for a new submachine gun in JSDF service. It was adopted for non-frontline proposes, such as a backup weapon for vehicle operators, and special operation units in 1999. It remains in limited service with Japanese military and police special forces.

The PM-9 is a blowback-operated submachine gun based on the Uzi, using the same action. It features an integral foregrip to aid in sustained fully-automatic fire, a flash suppressor is also placed at the end of the barrel. The weapon can be upgraded with optional attachments, such as a folding stock, a sound suppressor, and a reflector sight. Pre-production models of the PM-9 used wooden furniture. 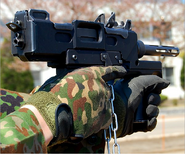 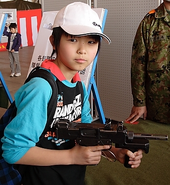 Top of the PM-9's receiver.

Pre-production variant of the PM-9 with wooden furniture.
Add a photo to this gallery
Retrieved from "https://guns.fandom.com/wiki/Minebea_PM-9?oldid=79887"
Community content is available under CC-BY-SA unless otherwise noted.