20-round detachable box magazine
The Model 45A was a .30 caliber bullpup battle rifle/light machine gun developed by the United States Army in the Philippines in 1945. The weapon existed in prototype or mock-up form, but never entered production. The rifle was sparsely documented until annotated photographs of the rifle were found in the archives of the United States Army Signal Corps.

The Model 45A utilized the magazine from the M1918 Browning Automatic Rifle. Rather than iron sights, it featured an integral scope. Its purpose is unclear, but it is alternately described as a "experimental .30 caliber light machine gun (LMG)" or a "field expedient .30 cal." 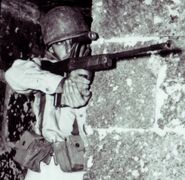 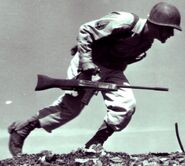 Retrieved from "https://guns.fandom.com/wiki/Model_45A?oldid=70797"
Community content is available under CC-BY-SA unless otherwise noted.