The weapon was first shown off in 2012 as a potential new weapon system design by TsKIB SOO.[1] No work is known to have been done on the prototype since 2012 and the weapon is assumed to be in developmental hell or shelved entirely. Little else is known about the weapon complex.

The OTs-69 is a weapons complex which consists of a .45 caliber submachine gun and what is said to be a suppressed 30mm underbarrel grenade launcher. The weapon features only one trigger and a switch is present on the left to control which portion of the gun the shooter is using. The weapon feeds from quad-stack 40-round box magazines and fires in single shots or bursts. A rubber buttpad is used on the shoulder stock. The weapon's sights are located in the carry handle, while grenade launcher sights appear to be mounted offset to the right of the gun on the barrel.[2]

OTs-69 along with numerous other TsKIB SOO weapons 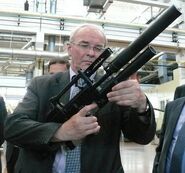 Retrieved from "https://guns.fandom.com/wiki/OTs-69?oldid=92418"
Community content is available under CC-BY-SA unless otherwise noted.