40 rounds (20 in each detachable box magazine)

Developed in hopes of increasing the hit probability of soldiers in combat, the SALVO rifle was designed by Stefan K. Janson, who had previously created the Enfield EM-2 bullpup rifle for the British Army.

The SALVO rifle design appears to be a pair of FN FAL rifles grafted together, sharing a single gas system on a custom-built receiver. It is based on the T48 rifle, which, in turn, was a license-produced version of the FAL.

The SALVO rifle was chambered for the experimental 5.56mm T65 Duplex cartridge, based on a long-necked variant of the 7.62×51mm NATO cartridge case loaded with a pair of conventional projectiles. Two variants of the duplex cartridge existed: one fired two 35 grain projectiles at 3,505 ft/s, while the other fired a pair of 41 grain bullets at 3,250 ft/s.

An example of the SALVO rifle is currently held in the collection of the Springfield Armory Museum. 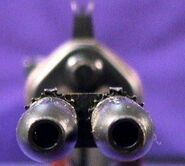 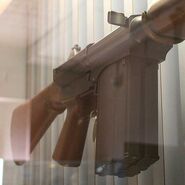 Retrieved from "https://guns.fandom.com/wiki/Olin-Winchester_SALVO_rifle?oldid=86618"
Community content is available under CC-BY-SA unless otherwise noted.